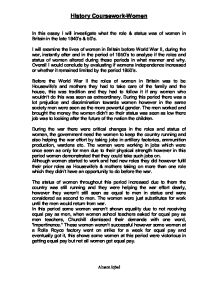 I will examine the lives of women in Britain before World War II, during the war, instantly after and in the period of 1950’s to analyse if the roles and status of women altered during these periods in what manner and why. Overall I would conclude by evaluating if womens independence increased or whether it remained limited by the period 1950’s.

Before the World War II the roles of women in Britain was to be Housewife's and mothers they had to take care of the family and the house, this was tradition and they had to follow it if any women who wouldn’t do this was seen as extraordinary.During this period there was a lot prejudice and discrimination towards women however in the same society men were seen as the more powerful gender. The men worked and brought the money the women didn’t so their status was seen as low there job was to looking after the future of the nation the children.

During the war there were critical changes in the roles and status of women, the government need the women to keep the country running and also helping the war effort by taking jobs in artillery factories, ammunition production, wardens etc. The women were working in jobs which were once seen as only for men due to their physical strength however in this period women demonstrated that they could take such jobs on.

Although women started to work and had new roles they did however fulfil their prior roles as Housewife's & mothers taking on more than one role which they didn’t have an opportunity to do before the war.

The status of women throughout this period increased due to them the country was still running and they were helping the war effort dearly, however they weren’t still seen as equal to men in status and were considered as second to men. The women were just substitutes for work until the men would return from war.

Instantly after the war men were demobilized and sent back home from the war this impacted women extremely since the independence they had during the war would no longer exist. The women were instructed to go back home and fulfil their previous roles which they had before the war and the men would return to the jobs.

Many women however better suited some jobs than men but weren’t kept after the war only because they were women they were told that their priories should be at home. This can be seen when a deputy newspaper editor was told she was dismissed, “Oh it’s nothing wrong with your work, but we have to safeguard the succession and the successor had to be a man.” The status of women during this period was shown as higher since the women had a very important duty which was to look after the nation by bringing up the children.

In the period of 1950’s some women wanted to carry on working work but were allowed part time jobs which could be easily dismissed, many women were told that they should look after the homes working wasn’t there roles such women who wanted to work were seen as unusual by the society of Britain.  In the advertisement published by the government which said “Your after-the-ware dream is coming true. Now yours will be the responsibility of looking after the nation’s health” clarifies the point.

The Beveridge report recommended a welfare state for the nation which was introduced by the government this benefited women economically, politically and socially this meant women no longer needed to depend on the men. The welfare state launched the National heath services which promised to provide health care for everybody this was the first time women were covered in health, furthermore it paid family allowance directly to the women this gave women more independence and money of there own which they could use on their desire.

The affluence increased in the 1950’s due to the welfare state, this changed the lives of the women since they could purchase labour saving appliances which gave them more time and independence from the home they no longer needed to spend a whole exhausting day washing the cloths.

To conclude, I belive that women gained more independence in the period of the 1950`s exceeding from just being house wife’s and mothers. The Beverigde report and the welfare sate transformed womens life giving them importance and care, furthermore the increased affluence also provided women with labour saving appliances and increase in independence. Although these changes had been made they did not completely change womens independence it was still limited in various ways one of the ways was women were only allowed part time jobs. The roles of women in theses period was to be housewife’s and mothers though economical, social and political changes brought increase in independence however, it can also be seen as not equal to men and limited.