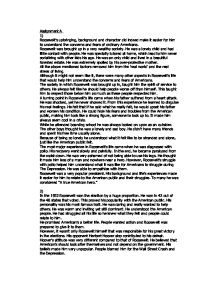 Roosevelt's upbringing, background and character did indeed make it easier for him to understand the concerns and fears of ordinary Americans.

Assignment A 1) Roosevelt's upbringing, background and character did indeed make it easier for him to understand the concerns and fears of ordinary Americans. Roosevelt was brought up in a very wealthy society. He was a lonely child and had little contact with people. He was specially tutored at home, which lead to him never socializing with other kids his age. He was an only child and lived in a beautiful forested estate. He was extremely spoiled by his over-protective mother. All the above mentioned factors removed him from the 'real world' and the real stress of living. Although it might not seem like it, there were many other aspects in Roosevelt's life that would help him understand the concerns and fears of Americans. The society in which Roosevelt was brought up in, taught him the spirit of service to others. He always felt like he should help people worse off than himself. This taught him to respect those below him as much as these people respected him. A turning point in Roosevelt's life came when his father suffered from a heart attack. He was shocked, yet he never showed it. From this experience he learned to disguise his real feelings. He felt that if he said what he really felt, he would upset his father and worsen his condition. He could hide his fears and troubles from the American public, making him look like a strong figure, someone to look up to. ...read more.

Basically he's telling Americans that he will fight this war of despair that The Depression has caused them. This appealed to many who ended up voting for him. At the time of this speech in 1932, the Great Depression had just started and people were living in poverty. People lost their jobs, homes and possessions. Many had to live in Hooverville's and depend on soup kitchens to provide food. Roosevelt's New Deal came as a refreshment. The Americans wanted to get out of this mess and regain their lives. 2) Sources B and C's judgment on the New Deal differ greatly. Source B is the judgement of an American historian writing in 1945. He speaks greatly Roosevelt's achievements. It states that because of FDR (and the Civilian Conservation Corps), the US' natural resources were restored. It also states that unemployment went down because Roosevelt had introduced unemployment assistance and pensions for seniors. Source C, an extract from the book 'The Roosevelt Myth'by an American Historian published in 1945, is completely the opposite compared to source B. It states that America's national debt went up to $250 billion after Roosevelt became president. Prior to his presidency it was $19 billion. There are many things Source B and C disagree about. One is employment. Source B explains that because of the Civilian Conservation Corps, 3 million (previously unemployed) men helped plant 17 million acres of new forests and built over 6 milion dams. ...read more.

Interpretation 1 states that the 'New Deal helped many Americans' and 'gave them self-respect'. These two statements are related to source B which states 'restoration of self-confidence' and goes on to talk about the achievements of the New Deal just like interpretation 1 does. In interpretation 2 it states that 'the New Deal wasted a lot of money.' Source E supports this statement by showing Roosevelt putting more and more money into an almost shattered economy, pretty much wasting the money. 8) There has been a lot of disagreement in the US over the effects of the New Deal. To many people the New Deal hardly did anything. It was WWII that solved the unemployment and manufacturing problems. Take source B for example. Source B is the judgement of an American historian writing in 1945. This historian states numerous points that help back up the fact that the New Deal did indeed help many American's. Source B explains that one of the most major achievement of the New Deal is the 'restoration of self-confidence'. People's attitude's changed 'from depression and discouragement to excitement and hope'. It also says that a more definite achievement would be the physical rebuilding of the country. The men in the Civilian Conservation Corps helped plant 17 million acres of forests and built over 6 million dams to stop erosion. Another source, C for example, states the complete opposite, namely that Roosevelt made things worse. It explains that before Roosevelt became president the debt of America was only $19 billion. Now that Roosevelt is president, it has risen up to an astonishing $250 billion. ...read more.