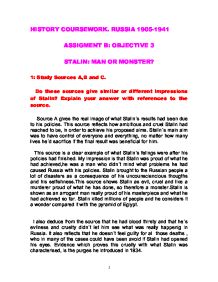 HISTORY COURSEWORK. RUSSIA 1905-1941 ASSIGMENT B: OBJECTIVE 3 STALIN: MAN OR MONSTER? 1: Study Sources A,B and C. Do these sources give similar or different impressions of Stalin? Explain your answer with references to the source. Source A gives the real image of what Stalin�s results had been due to his policies. This source reflects how ambitious and cruel Stalin had reached to be, in order to achieve his proposed aims. Stalin�s main aim was to have control of everyone and everything, no matter how many lives he�d sacrifice if the final result was beneficial for him. This source is a clear example of what Stalin�s felings were after his policies had finished. My impression is that Stalin was proud of what he had achieved,he was a man who didn�t mind what problems he had caused Russia with his policies. Stalin brought to the Russian people a lot of disasters as a consequence of his uncounsciencious thougths and his selfishness.This source shows Stalin as evil, cruel and like a murderer proud of what he has done, so therefore a monster.Stalin is shown as an arrogant man really proud of his masterpiece and what he had achieved so far. Stalin killed millions of people and he considers it a wonder compared it with the pyramid of Egiypt. I also deduce from the source that he had blood thirsty and that he�s evilness and cruelty didn�t let him see what was really happenig in Russia. It also reflects that he doesn�t feel guilty for al those deaths , who in many of the cases could have been avoid if Stalin had opened his eyes. Evidence which proves this cruelty with what Stalin was characterised, is the purges he introduced in 1934. Source A and B are similar because both show that Stalin was proud of the results achieved with the policies he introduced and that he doesn�t regret about all those deaths. ...read more.

The link between this two sources is: if Stalin managed to get rid of all the Bolsheviks to replace them by his supporters who do what he says, which is why everyone is shown as Stalin in Source B. instead therefore he will have the absolute control and power, if he managed to do so he then won�t have opposition and will benefit his policies. So from these sources we can spot out the differences ( source I shows the show trials whereas source J doesn�t) similarities( both of them reflect the consequences of these show trials), and a link between the two( if Stalin managed to get rid of the Bolsheviks he would then be able to occupy their posts ( source J) ). They both show the extent Stalin had control by being the judge in the show trials and dominating the Supreme Soviet in the other. Basically these two Sources are different because Source I shows the real show trials whereas Source J shows the consequences of it. If the executions hadn�t had occured then what Source J wouldn�t have been able to occur because is the next step Stalin took after these brutal executions. Apparently these two sources aren�t showing the same view about the show trials of Stalin because Source I is reflecting into what degree those people were sommitted to and how far did Stalin was able to reach to until he achieved the absolute power and control over everything. Whereas Source J is demonstrating what Stalin obtained after the show trials, it is basically its consequences. The thing is that if Stalin wouldn�t have hanged those people he would not be replacing those empty posts by their strong and loyal supporters. Source J is the actual consequences of the show trials. Stalin is trying to demonstrate that he has power enough to do what he wanted and when he wanted, Stalin was too stubborn to recognise his errors and to admit what he did wrong while he was the leader and responsable of Russia. ...read more.

Furthemore, livind standars did not improve much, housing remaind poor and workers were receiving low wages with strict discipline and severe punishments. Stalin got rid of some of the Soviet Union�s best brains, thinkers, writers, artists, who could have produced explendid work in many fields. Stalin did also destory the Communist Party, turning it into an organisation for carrying out his orders and having the authority of putting his supporters in key positions. All these events can make everyone think he was a monster. Whereas others were in favour of Stalin because: He turned Russia in to a powerful modern industrial nation in 30 years. Also there were advances in medicine and education, enormous numbers of people learned to read and write. We also know that his policy of forced industrialisation saved Russia in the second World War. Adding t othis that his strong leadership helped the Soviet Union to win the Second World War. Despite these triumphs he brought, the number of deaths during Collectivisation and his purges were such as large that no one could compensate those families destroyed, the harm he had caused and had to pay a high price due to the greedness Stalin had demonstrated to have, in order to become even more powerful. In general, I think Stalin was a monster by the way he treated the lower working classes and members of the Party he hated, which some of them ended in a coffin. I will never defend the method he used to control the Russians and obtain his reward. He didn�t only mind sacrifying others people�s lives, he also blamed workers in case of trouble, so he would get away with problems. This absolute power Stalin was aiming for, turned a ruthless politician into a montrous tyrant. Despite the fact that Stalin showed to be a skilled, indeed gifted politician, he had a dark evil side to his nature which is why there is so much disagreement about him. BY: PAULA VALL�S DUR�N. 1 ...read more.