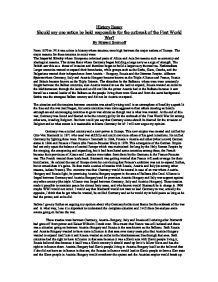 Should any one nation be held responsible for the outbreak of the First World War?

History Essay Should any one nation be held responsible for the outbreak of the First World War? By Edward Smirnoff From 1870 to 1914 was a time in history where tensions were high between the major nations of Europe. The major reasons for these tensions to occur were: The Imperial Rivalry where Europeans colonised parts of Africa and Asia for reasons such as economy and ideological reasons. The Arms Race where Germany began building a large navy as a sign of strength. The British saw this as a threat of invasion and therefore began to build a larger navy themselves. Nationalism Larger countries wanted to expand their boundaries, while groups such as the Serbs, Slavs, Czechs, and the Bulgarians wanted their independence from Austria - Hungary, Russia and the Ottoman Empire. Alliance System where Germany, Italy and Austria-Hungary became known as the Triple Alliance and France, Russia and Britain became known as the Triple Entente. The situation in the Balkans where wars were constantly fought between the Balkan countries, also Austria wanted to use the land to expand, Russia wanted an outlet to the Mediterranean through the lands and so did not like the power Austria had in the Balkans because it saw herself as a natural leader of the Balkans as the people living there were Slavs and from the same background. Serbia was the strongest Balkan country and did not let Austria to expand. ...read more.

The Triple Alliance created by Germany forced France into action. In 1894 France sign an Alliance with Russia because both needed an ally in case of war plus, France promises to support Russia in their claims in the Balkans. France saw this as an opportunity to get even with Germany after their humiliation in 1970. Later Britain signs the Cordial Entente with France and in 1907 the Anglo-Russian Entente because she did not want to see France and Russia be destroyed, that would directly threaten Britain of German invasion. Europe was now split into two sides, the Triple Entente and the Triple Alliance. These alliances originally created by Germany made it possible for the First World War to break out, but even on this stage, it could be prevented. On the Sunday 18th June 1914 in Sarajevo a Serbian terrorist organisation known as "The Black Hand" successfully attempted to assassinate the Archduke Franz Ferdinand of Austria. It would seem that it would be irrational to have a war due to such a relatively insignificant event but the Austrians felt that in an age where an insult could not be left un avenged, someone must be blamed. The Archduke himself did not want war, ironically his death caused the very thing he was trying to avoid. Austria-Hungary blamed Serbia for the attack due to the out coming believe that the terrorist organisation was from Serbia. Austria-Hungary saw this as an opportunity to attack Serbia, show the strength of the Hapsburg family and weaken the Slav nationalists ...read more.

Anyway the conclusion I have come to is that Germany should be blamed for most of what has happened. It should definitely be blamed for the hostile atmosphere created in Europe because it was Germany's fault that the alliance systems have been created, letting the war to outbreak. Although I believe it was Austria-Hungary's aggressive will to revenge on Serbia and that it was very mismanagement in a crisis, Germany should be blamed for encouraging Austria-Hungary to advance or even supporting them for such an act in the first place. And finally I think Germany is to blame for its aggressive behaviour in the way that they have not consulted Britain in the first place when they supported Austria-Hungary in attacking Serbia, also when they were invading Belgium. Also I think Germany is to blame for its aggression and power hunger, when they started the Arms Race, their showing of the dominance of Germany when they sent a battle ship to the Morocco in the Moroccan crises. Every road leads to almost as though Germany wanted a war and tried to prove to the world the dominance of Germany already when Bismarck created it by war in 1970. Germany was on the whole very aggressive and was involved and is to blame for in the Arms race, causing the hostile atmosphere, giving Austria-Hungary unconditional support in the Balkans crisis and the invasion of Belgium. ...read more.