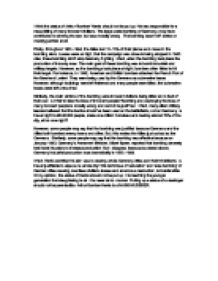 Should the statue of Arthur &quot;Bomber&quot; Harris be put up?

I think the statue of Arthur 'Bomber' Harris should not be put up. He was responsible for a mass killing of many innocent civilians. The large scale bombing of Germany, may have contributed to winning the war, but was morally wrong. The bombing wasn't effective or morally justified at all. Firstly, throughout 1933-1944, the Allies lost 10-15% of their planes and crews in the bombing raids. Losses were so high, that the campaign was close to being stopped in 1943. Also, these bombing didn't stop Germany fighting. Infact, when the bombing took place the production of industry rose. ...read more.

They were being used by the Germans as submarine bases. However, although buildings were left flattened and many people were killed, the submarine bases were left untouched. Similarly, the main victims of the bombing were innocent civilians being killed at no fault of their own. Is it fair to take the lives of innocent people? Bombing and destroying the lives of many innocent people is morally wrong and cannot be justified. Infact, many allied military leaders believed that the bombs should've been used on the battlefields, not on Germany. ...read more.

But I disagree, because as stated above, Germany industrial production rose dramatically in 1933-1944. Infact, Harris admitted his aim was to destroy whole Germany cities and their inhabitants. Is it ever justifiable to wipe out a whole city? His technique of 'saturation' and 'area bombing' of German cities causing countless civilians losses and enormous destruction, is indefensible. IN my opinion, the statue of Harris should not be put up. It is teaching the younger generation that slaughtering is ok. It is never ok to murder. Putting up a statue of a destroyer should not be permissible. Arthur Bomber Harris is a MASS MUDERER. ...read more.