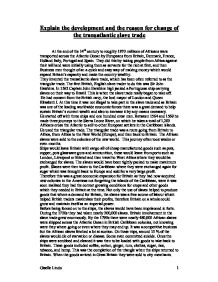 Explain the development and the reason for change of the transatlantic slave trade At the end of the 14th century to roughly 1870 millions of Africans were transported across the Atlantic Ocean by Europeans from Britain, Denmark, France, Holland Italy, Portugal and Spain. They did this by taking people from Africa against their will and were initially using them as servants for the rich at first, and then Business men thought of an a quick and easy way of making money which would expand Britain's capacity and make the country wealthy. They invented the transatlantic slave trade, which has been often referred to as the triangular trade. The first British, English slave trader to do this was Sir John Hawkins. In 1562 Captain John Hawkins high jacked a Portuguese ship carrying slaves on their way to Brazil. This is when the slave trade really began to take off. He had consent from the British navy, the lord mayor of London and Queen Elizabeth I. At this time it was not illegal to take part in the slave trade and as Britain was one of the leading worldwide economic forces there was a great demand to help sustain Britain's current wealth and also to increase it by any means necessary. He started off with three ships and one hundred crew men. ...read more.

In 1772 lord Mansfield came to a decision and made it illegal to forcibly remove any person from England so therefore the slaves brought to Great Britain would not be able to be sent back to the colonies as a against their will. In 1778 the House of Commons set up a committee to investigate the slave trade. In 1780 the petition against the slave trade was presented to parliament by the Quakers. In May 1787 the society for the abolition of the slave trade was established and trying to raise public awareness. Influential supporters such as John Wesley and Josiah Wedgwood were strong believers of this campaign, which they later persuaded William Wilberforce who was also an MP, to be their spokesman in the House of Commons. William Wilberforce dedicated his life as a member of parliament to bring an end to the slave trade. Their aim was to inform the British public about the intense cruelty of the trade and the British connections in the sugar trade. Clarkson was given the responsibility of collecting information to support the abolition of the slave trade. By doing so he went to gather evidence from some of the ports around Britain. This included interviewing 20,000 sailors and obtaining equipment used on the slave ships such an iron handcuffs, leg shackles and branding irons. ...read more.

The slave trade completely changed the outlook of Britain. Britain became more powerful then ever before, with the creation of new technologies such as the steam engine and led to the numerous of new banks which show this effect today. There was also a large resounding black community in Britain. After the abolition there were a lot of racial attitude. However Africans and Caribbean's brought a lot of culture into European society. However there is a very clear image that the slave trade had an enormous and positive impact on Britain but had a very negative impact on Africa in economic gain. This showed allot of shame amongst many citizens at how the minority of both Europe and Africa will stoop to satisfy their greed, a greed which developed through the slave trade and remains with us still today. The consent demand for profit drove many men to do the most evil things as the outcome of the trade was the reward. This held many to remain silence about what they saw. Again these to can be seen in our system of global capitalism today, where we are buying materials that are made by modern day slaves. To help me complete my essay I used the following resources Michael Woods Impact of Empire: The British Empire 1585-the Present By authors: James Byrom, Christopher Culpin, Michael Riley The slave trade By author Hugh Thomas www.channel4.com/history/microsites/H/history/a-b/britains_slave_trade.html www.spartacus.schoolnet.co.uk/slavery slavetrade.par wikipedia.org/ Wiki/William_Wilberforce liament.uk/ ?? ?? ?? ?? 1 Giselle Lindo ...read more.