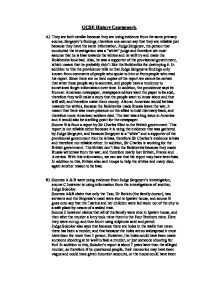 Source based questions on the Russian revolutions.

GCSE History Coursework A) They are both similar because they are using evidence from the same primary source; Sergeyev's findings, therefore one cannot say that they are reliable just because they have the same information. Judge Sergeyev, the person that conducted the investigation was a "white" judge and therefore we must assume that he is bias towards the whites and he will try and make the Bolsheviks look bad. Also, he was a supporter of the provisional government, which means that he probably didn't like the Bolsheviks for destroying it. In addition to this the providence tells us that Judge Sergeyevs findings only known from comments of people who spoke to him or from people who read his report. Since there are no hard copies of the report we cannot be certain that what these people say is accurate, and people have a tendency to sometimes forget information over time. In addition, the providence says its from an American newspaper, newspapers editors want the paper to be sold, therefore they will make a story that the people want to know about and that will sell, and therefore make them money. Also an American would be bias towards the whites, because the Bolsheviks made Russia leave the war, it meant that there was more pressure on the allies to hold Germany back, and therefore more American soldiers died. The war was a bug issue in America and it would also be a selling point for the newspaper. Source B is from a report by Sir Charles Eliot to the British government. ...read more.

It could have been painted over 20 years later, after the murder. This is usefull because it shows us how the murder was taken out in the eyes of other people, and it can also show us the results of the investigation since this picture uses that evidence. Finally source F; this is not reliable for many reasons. Firstly, the investigator, Judge Sokolov is a white, and therefore is bias towards the whites and will try and make the Bolshevik crime seem even worse. It also says that he got his information from "witnesses". If there were any witnesses at the murder, they all have to be Bolshevik soldiers (because according to him all the royals family died), and I don't think that any Bolshevik soldiers remained after the whites took over Ekaterinburg, they must have either ran away or got killed in the fighting. This makes me beleive that he actually didn't get any information, but instead made a plan to suit his own theory and results; that all the family were killed and some were kneeling down or sitting on chairs. In addition to this, he providence says that this was taken from a book that he wrote. The only reason people write a book is to make money, and he could have put that in his book so people would buy it, its not nescessarily the truth. However, the alleged picture in source F backs up this source. In the picture there is a door next to the damage, and if you look on the layout of the people in source H, you can also see a door behind the imperial family. ...read more.

Source J mentions nothing about where or how the family were killed, so it doesn't support this source at all. In addition, this could have just been someone damaging the wall on purpose. * Source H: This source shows us a plan of possibly how the murderers and the family were arranged at the time of the murder, again, source J did not give us any information on the whereabouts or the method of the killing, so again this source receives no support. * Source G: To a certain point, it also does not support this source. The painting shows us the Bolsheviks attacking the imperial family. However, the position of the people in the painting seems to resemble the plan of source H. Suffice is to say, that the plan of source H was probably used to construct the painting in conjunction with the description in source D. The painting however does show the family being murdered, which is what source J is saying. However, the painting doesn't show where all the members are. There only seems to be 5 women in the picture (including the one laying on the ground) and only 2 men, however, according to the other sources there is one more woman, the Empresses maid, and 2 more servants, which could either be male or female. These 3 people are missing from the painting. Source J says that there are 2 children missing, not 3 servants. Again this shows that this source cannot be properly supported, because its using information from source H, another unsupported source and it's "telling" a different story to what source J is saying. ...read more.