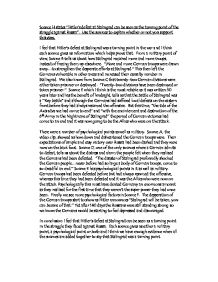 Source H states (TM)Hitler(TM)s defeat at Stalingrad can be seen as the turning point of the struggle against Russia(TM)(TM). Use the sources to explain whether or not you support this view.

Source H states ''Hitler's defeat at Stalingrad can be seen as the turning point of the struggle against Russia''. Use the sources to explain whether or not you support this view. I feel that Hitler's defeat at Stalingrad was a turning point in the war and I think each source gives us information which helps prove that. From a military point of view, Source B tells us about how Stalingrad required more and more troops, instead of freeing them up elsewhere. ''More and more German troops were drawn away...to strengthen the desperate efforts at Stalingrad.'' This then left the Germans vulnerable in other areas and increased their casualty number in Stalingrad. ...read more.

But this time, ''the tide of the Axis advance had come to end'' and ''with the encirclement and destruction of the 6th Army in the Nightmare of Stalingrad'' the period of German victories had come to an end and it was now going to be the Allies who were on the attack. There were a number of psychological points as well as military. Source A, the video clip, showed us how down and disheartened the German troops were. Their expectations of simple and easy victory over Russia had been dashed and they were now on the back foot. Source D, one of the only sources where a German admits to defeat, tells us about the distress and alarm the people felt when they realized the Germans had been defeated. ...read more.

Psychologically this must have dented Germany an enormous amount as they realized for the first time that they weren't the super power they had once been. Finally we see more psychological factors in Source F. The desperation of the German troops start to show as Hitler announces ''Stalingrad will be taken, you can be sure of that.'' Yet after 140 days the Russians were still standing strong so we know the Germans would be starting to feel depressed and discouraged. In conclusion I feel that Hitler's defeat at Stalingrad can be seen as a turning point in the struggle they faced against Russia. Each source gives us either a military point, a psychological point or both and I think we have enough evidence when all the sources are added together to say that Stalingrad was a turning point. ...read more.