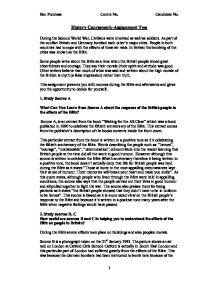 Sourcework - The impression that the British faced the Blitz with courage and unity is a myth.

History Coursework-Assignment Two During the Second World War, Civilians were involved as well as soldiers. As part of the conflict Britain and Germany bombed each other's major cities. People in both countries had to cope with the effects of these air raids. In Britain the bombing of the cities was known as the Blitz. Some people write about the Blitz as a time when the British people shoed great cheerfulness and courage. They say their morale (their spirit and attitude was good. Other writers believe that much of what was said and written about the high morale of the British is myth (a false impression) rather than truth. This assignment presents you with sources during the Blitz and afterwards and gives you the opportunity to decide for yourself. 1. Study Source A What Can You Learn from Source A about the response of the British people to the effects of the Blitz? Source A, is an extract from the book "Waiting for the All Clear" which was a book published in 1990 to celebrate the fiftieth anniversary of the Blitz. This extract comes from the publisher's description of the books contents inside the front cover. This particular extract from the book is written in a positive tone as it's celebrating the fiftieth anniversary of the Blitz. Words describing the people such as: "heroes", "courage", "unshakeable", "determination", all contribute into the reader learning that British people at the time did all the work in good humour. However although this source is written to celebrate the Blitz fiftieth anniversary therefore it being written in a positive tone, the book doesn't actually deny that life for British people was hard during the Blitz as it states "Those at home in the most appalling circumstances kept their sense of humour. Their memories will break your heart and make you smile". As this quote states, although people who lived through the Blitz were held in appalling conditions, the source also says that the people carried out their lives in good humour and all pulled together to fight the war. ...read more.

They also weren't used to the air raid sirens and therefore everybody went frantic when they heard one as with the amount of people dying in the East End, they really feared for their lives. People were also killed however by the frantic situation of an air raid such as the Bethnal Green Tube Disaster. The Bethnal Green Tube station had room for 10,000 people and was often used by East Londoners. However, on the night of March 1943, an air aid alarm had sounded and by about 8:30pm, 2100 people were inside the tube station. However, also at this time, one of the new anti-aircraft rocket batteries fired its salvo of 60 rockets which made a frightening roar. The crowd at the entrance were not used to this sound and panicked to get inside the tube station by pushing and shoving anyone. Inside, a woman had slipped, a man then tripped over her and within 15 seconds, the stairs were jammed with hundreds of fallen people. The pressure of the crowd had prevented rescue therefore leaving a total of 173 people that suffocated to death. 84 of who were women, 62 children and 27 men. Source F is an extract from Harold Nicholson's diary, 17th September 1940. According t the source, Nicholson knew several members of the government Nicholson describes tin his diary that everyone is "worried about the feeling in the East End of London where there is much bitterness. It is said that even the King and Queen were booed the other day when they visited the destroyed areas". It is noted that Nicholson has mentioned that even the King and Queen were booed when they visited the East End. At this time, the King and Queen were seen as patriots and so it was only under the worst circumstances where they booed. Nicholson is described as also knowing a few MP's therefore he is likely to know that his happened. ...read more.

In 1939 many people had evacuated but returned home and when war was avoided many people returned home. After Brittan had declared war on Germany, many people were evacuated on June 1940 as France had just been taken over and people thought that bombing raids were inevitable to occur now that Germany had a strong army and also outnumbered Britain in the air war. Also referring to source D, many evacuations were taking place around the 10th of September so many children would still be in London. Therefore although the source is portraying an image that people weren't courageous and organised during the Blitz it doesn't state that it the East End was heavily bombed because of the docks, also that many evacuations had yet to take place and also due to the fact that the report was done on the early Blitz at a time when people were scared. I believe that Britain did face the Blitz with courage and unity and that it isn't a myth as sources such as E and F especially try to describe. Both of these sources are written at the start of the Blitz at a time when Britain had never experienced a war like this and had never any previous experience of the Blitz. Therefore, people would be "hysterical" as is mentioned in source E. Also, both sources only the effects of the Blitz in the east end of London. This particular area was severely bombed because of the docks which Germans mainly targeted at the start of the war because this was where munitions were deported for the allies (Britain, America and France at the time). Because of these circumstances, this place may well have been particularly bad but it's just a tiny part of Britain. Furthermore, many people after the Blitz said that there was a sense of community during the Blitz as everybody realised that in order to win the war they had to keep together as a unit and care for each other. ?? ?? ?? ?? Ben Purchase Centre No. Candidate No. 1 ...read more.