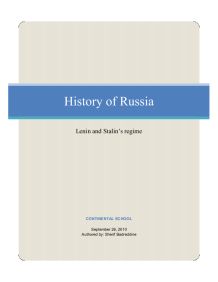 Table of Contents Lenin and Stalin's Characters and beliefs They were many similarities and differences between Lenin's and Stalin's characters and beliefs. Stalin grew up in a harsh environment and lived like all the peasants used to live in Russia during that period of time, he was the fourth child that his mother had given birth to in less than four years yet all of the first three died so his mother was understandably overprotective of her child, while in the other hand Lenin lived a much more luxurious life, his father was a local school inspector and his father was very conservative and he was a devoted member of the Russian Orthodox Church, Lenin's older brother Alexander Ulyanov helped him get interested in the political scene where he was introduced to the ideas of Karl Marx. While Lenin was ta university he started studying politics and he was also involved in demonstrating against the tsar after one demonstration Lenin was arrested and the police man asked him :"Why are you rebelling, young man? After all, there is a wall in front of you." Lenin confidently replied: "The wall is tottering; you only have to push it for it to fall over." After his arrest he was expelled from his university, it became apparent that during his time in university he wasn't exactly loved by the staff members, as this quote shows, "The university authorities commented upon his attitude: He attracted attention by his secretiveness, inattentiveness and indeed rudeness..." Meanwhile Stalin managed to get into a local church school and despite his poor health he managed to do very well and eventually earned a free scholar-ship. Stalin was introduced to the ideas of Karl Marx when he was studying at a seminary. In May 1899 Stalin was expelled from the seminary and the authorities gave many conflicting reasons while Stalin said the he got expelled for trying to convert a student into Marxism. ...read more.

Lenin made sure that the people did try to revolt against him by taking out the influence of the media by imposing censorship and deploying propaganda schemes in order to make he look like a brave and helpful leader capable of turning Russia into a power house. When Lenin learned about the ideas of Karl Marx he wanted to use it in Russia however he realized that Russia wasn't qualified to use the ideas of Karl Marx so he decided to change his ideas slightly and then he came up with communism (later called Leninism) so he incorporated this to Russia's political system. Lenin believed that the only reason why Russia wasn't a superpower yet is because that the political system wasn't lead properly and the Tsar wasn't concentrating the Russian people, the reason why he didn't use capitalism is because he was afraid that Rival Parties will waste too much time trying to gain votes for the people that they wouldn't concentrate in helping out the Russian people also Lenin wanted total and complete rule over Russia as he believed it is the only way Russia would be able to turn itself into a world powerhouse. Stalin's Impact on Russia and the Russian People Stalin had a huge impact on Russia, both negatively and positively. Stalin wanted to make Russia to modernize at a fast rate that Russia could make up a 50 year gap in just 10 years. He wanted to change the industry to such an extent that instead of relying the agriculture and farming he wanted Russia to depend more on the industry, while Russia was still recovering from the first world war Stalin noticed that it's industrial production was extremely low compared to other western countries and he wanted, Stalin believed that if the industries don't improved than Russia wouldn't be able to defend itself from western countries that hated communism, he believe that industrialization would bring about defence. ...read more.

Firstly he scrapped Lenin's New Economic Plan and he introduce the Five year plan which proved to be successful but it was the Russian people who suffered greatly because of extremely harsh working conditions and because of the fear of the corrupt justice system which executed any opposition of Stalin, they was also the great purges which killed about 7 million people while Stalin managed to kill 20 million Russian people and 14.5 million of those died of starvation during a famine which Stalin was thought to be responsible for due to the fact that his five year plan didn't upgrade farms and agriculture enough to be able to create enough food for the population and he also deported about 28 million people out of Russia, Stalin's Five Year plan yet successful way extremely harsh, it didn't allow managers to be creative and everything was done as said on the letter, works weren't given any leave and any absentees were arrested and executed for treason, and the managers were also required to punish the employees harshly and despite all the bad conditions they didn't revolt because their pay was with food rations so if they revolt they won't get any food and propaganda was used to increase people's morale in the industry once claiming that worker worked 400% more efficient than any average workers but money people were killed because of jealous co-worker and most of these figures were exaggerated. Stalin's emphasis on industry that all the other important commodities were forgotten, clothing was in short supply and many household items were no longer available and this lack of consumer product mad the living conditions in Russia to fall dramatically, now because of the purges Stalin grew even more powerful than before he got rid of all the politicians that dared to oppose him and after that nobody dared to challenge his authority, even when Russia was suffering in the second world war nobody questioned his authority. ...read more.