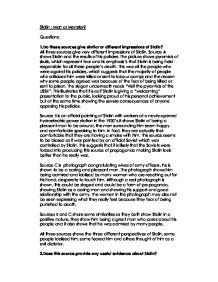 Stalin : Man or Monster? Questions: 1.Do these sources give similar or different impressions of Stalin? All three sources give very different impressions of Stalin. Source A shows Stalin and the results of his policies. The picture shows pyramids of skulls, which represent fear and its emphasis's that Stalin is being held responsible for all these people's death. This was all the people who were against his policies, which suggests that the majority of people who criticized him were killed or sent to labour camps and the reason why some people agreed was because of the fear of being killed or sent to prison. The slogan underneath reads "Visit the pyramids of the USSR". This illustrates that it is as if Stalin is giving a "welcoming" presentation to the public, looking proud of his personal achievement but at the same time showing the severe consequences of anyone opposing his policies. Source B is an official painting of Stalin with workers at a newly opened hydroelectric power station in the 1930's.It shows Stalin of being a pleasant man to be around, the men surrounding him seem happy and comfortable speaking to him. In fact, they are actually that comfortable that they are having a smoke with him. This source seems to be biased as it was painted by an official Soviet which was controlled by Stalin. ...read more.

This source suggests that the show trials had been planned beforehand meaning that the outcome of the trial had already been decided. Source J is also a cartoon showing Stalin's show trials. It was published in France in the late 1930's. In the courtroom, everything is controlled by Stalin. It shoes him as the judge, the barrister and the whole jury. This suggests that the whole trial was unjust, everything was under Stalin's control and no matter what the defendants would have said, they would have been executed as the outcome had already been decided. The two sources are very similar, they both give out similar messages and agree that the show trials were false and were completely controlled by Stalin. 6.Compare what these two sources say about Stalin. Source L is from a biography of Stalin published in 1983 in Britain. It is saying that Stalin was a very skilled and gifted politician but had a dark side to his nature. Source M is also from a biography of Stalin published in 1974 in Britain. "the explanation of his life is that he was corrupted by power. This statement suggests that Stalin was the way he was because of the effects of power. The source appears to be justifying the actions that Stalin took by saying "The terror was necessary, not only to keep men obedient, but even more to make them believe in him". ...read more.

Source K Stalin was very popular at the time, although he now appears like a monster the soviet public thought very highly of him. Stalin is a figure in history that creates conflicting opinions. Some historians think that he was a very bad politician whereas some think he was a gifted politician. Some think he was a monster and some think he was a hero. The sources give a good example of this as some sources describe Stalin as the greatest man that ever lived and some describe him dictator. The disagreement about Stalin id whether he was a good politician and whether he was a monster. It is difficult to know the whole truth about Stalin as the use of censoring and propaganda in the USSR at the time he was in power means that the reliability of the sources is questionable. Some sources which were published are also likely to be biased especially ones which were written by exiles who will say things against Stalin. In conclusion the sources suggest that the disagreement about Stalin is because of the differing accounts of Stalin's time in power, some portray him as a monster where some show him as the hero of the USSR. Stalin did many evil things but also did many good things for the USSR. He was also very paranoid and felt the need to kill anyone who was a threat to him. ?? ?? ?? ?? ...read more.