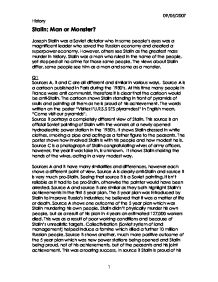 Stalin: Man or Monster? Joseph Stalin was a Soviet dictator who in some people's eyes was a magnificent leader who saved the Russian economy and created a superpower economy. However, others see Stalin as the greatest mass murder in history. Stalin was a man who ruled in the name of the people, yet stopped at no crime for those same people. The views about Stalin differ, some people see him as a man and some as a monster. Q1 Sources A, B and C are all different and similar in various ways. Source A is a cartoon published in Paris during the 1930's. At this time many people in France were anti communist, therefore it is clear that the cartoon would be anti-Stalin. The cartoon shows Stalin standing in front of pyramids of skulls and pointing at them as he is proud of his achievement. The words written on the poster "Visitez l'U.R.S.S SES piyramdes!" in English mean, "Come visit our pyramids". Source B portrays a completely different view of Stalin. This source is an official Soviet painting of Stalin with the workers at a newly opened hydroelectric power station in the 1930's. It shows Stalin dressed in white clothes, smoking a pipe and acting as a father figure to the peasants. The poster shows how involved Stalin is with his people and how modest he is. Source C is a photograph of Stalin congratulating wives of army officers, however, the year it was take in, is unknown. It shows Stalin shaking the hands of the wives, acting in a very modest way. Sources A and B have many similarities and differences, however each shows a different point of view. Source A is clearly anti-Stalin and source B is very much pro-Stalin. Seeing that source B is a Soviet painting, it isn't reliable as it had to be pro-Stalin, otherwise the painter would have been arrested. ...read more.

However, in neither sources, does he clearly state that in his opinion Stalin's ways of terror and execution were necessary or not necessary. For these reasons Khrushchev's assessment of Stalin can be considered as not trustworthy. He was only trying to gain the votes of both the pro-Stalin public and the anti-Stalin public, not giving a trustworthy assessment of Stalin. Khrushchev proved to the Russian people that he very much agreed with Stalin when he got in power. Khrushchev was a very ambitious man and had great aspirations for the Soviet Union; he later used vicious and brutal methods to fulfil his dreams for the Soviets. This shows that in actual fact Khrushchev agreed with Stalin's methods, although he does not admit it. Source G is a speech by Khrushchev to the Soviet Communist Party. Khrushchev had to remain slightly pro-Stalin so that he gains the support of the Soviet Communist Party. Khrushchev assessment cab be said not to be trust worthy as he is still careful not to praise or criticize any of Stalin's method. In source H, Khrushchev is not speaking to a specific group that supports or is against Stalin. Thus it is not in his interest to agree or disagree with Stalin's methods, just to get the support of the people he speaking to. Although Khrushchev tried to remain unbiased he still offers slightly different opinions in both sources. Source G is more pro-Stalin, source H is more anti-Stalin. Both sources can only be trusted to a certain degree, because Khrushchev main interests weren't to explain if Stalin's methods were correct or incorrect. His main interest was to gain the support of all the Russian people, and therefore had to try not to offer his own opinion of Stalin. Q5 Source I and Source J go a long way in agreeing on the show trials. Source I is an American cartoon and source J is a French cartoon published in the late 1930's. ...read more.

The source therefore gives a mistaken and misleading impression of how Stalin treated the red army. Another example of where propaganda is used is in source E. Source E is an extract from a speech by a writer of the congress of Soviets which was published in the Pravda, a newspaper of the Communist Party. The source praises Stalin and all his accomplishments, it praises Stalin like he is a god, 'generations to come will regard us as the happiest people because we lives in the same century as Stalin, because we were privileged to see Stalin, out inspired leader.' The source is totally biased, it will only mention good things that Stalin has done and disregard the many immoral things that he has done. The source is therefore misleading as propaganda is used. Sources that come from Russia, such as sources E and K, will be completely unreliable as the Soviets controlled the media and only printed pro Stalin articles, published pro Stalin books, etc. Sources that come from out of Russia like sources A, F, J, etc. are also unreliable as they were mostly written by people who were exiled by Stalin and were his enemies. A main reason why there has been confusion about Stalin is because of what point of view the historians had. In source L for example the point of view of the historian is focusing upon is Stalin's political skills. Another source might focus on his terror and show him as an evil man which would create confusion. Stalin is portrayed differently in every source as a result of the different point of view of the historian and what area of Stalin's personality the historian decides to focus upon. Sources that suggest different opinions about Stalin are because of different accounts when Stalin was in power. Some see Stalin as a monster, whilst others see him as a great man which creates confusion. The reasons for this confusion were mainly because the use of propaganda and what area of Stalin's personality a source would focus on. ?? ?? ?? ?? 09/05/2007 History 1 ...read more.