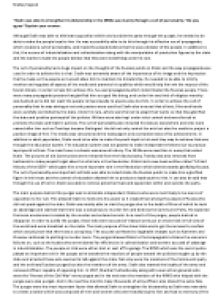 Stalin was able to strengthen his dictatorship in the 1930s was mainly through a cult of personality. Do you agree? Explain your answer.

﻿Shafaq Yaqoob ?Stalin was able to strengthen his dictatorship in the 1930s was mainly through a cult of personality.? Do you agree? Explain your answer. Although Stalin was able to eliminate opposition within and outside the party through the purges, he needed to be able to make the people loyal to him. He was successfully able to do this through his effective use of propaganda, which created a cult of personality, and made the people believe that he was a dictator of the people. In addition to this, the success of industrialisation and collectivisation along with the manipulation of production figures by the state and the workers made the people believe that they were benefiting under his rule. The cult of personality had a huge impact on the thoughts of the Russian public on Stalin and the way propaganda was used in order to achieve this is vital. Stalin was extremely aware of the importance of his image and the impression that he made on the people as it would allow him to maintain his dictatorship. He needed to be able to strictly monitor and regulate all aspects of the media and promote his qualities which would help him win the respect of the Soviet citizens. In order to help him achieve this, he used propaganda which indoctrinated the Russian people. ...read more.

The main purpose behind the purges was to eliminate independent thinkers who were most likely to be source of opposition to his rule. This allowed Stalin to hold onto his power as it created fear among the people of Russia who did not speak against the state. Stalin was mainly able to start the purges due to the death of Kirov of which he took an advantage and claimed that there was a conspiracy to murder him and destroy the Communist Party. He exploited the tense environment created by the murder and ordered arrests. As a result of the purges, people started to disappear. In order to justify the purges, those who were accused of treason were put on show trials in full view of the world and were broadcast on the radio. The main purpose of the show trials was to get the accused to confess which would prove that there was a conspiracy. The accused confessed to laughable charges such as Kamenev and Zinoviev confessed to plotting to murder Lenin. The purges allowed Stalin to find scapegoats to blame the economic failures on, such as the kulaks who were blamed for efficiencies in collectivisation and workers accused of sabotage in industrialisation. The people on trial were either shot or sent off to gulags. ...read more.

The main aims of collectivisation was to modernise farming and allow the farmers to advance from the primary sector to the secondary sector which would release more farmers for industries. And as a result of collectivisation, more grain was produced which could be acquired by the state a low price. And the farms were also successfully modernised with new machinery such as tractors which made framing more efficient. Industrialisation and collectivisation was important as it allowed Stalin to control the economy and the exaggeration of production figures by the stated and workers made the people think that they were benefitting under his rule. On balance, it can be said the cult of personality indoctrinated the people of Russia into making him portrayed Stalin as a god and the strict control of media only depicted a positive image of him. However, the purges and show trials were the most important as it removed opposition within and outside the party and created fear among the people as they did not want to face the consequences of opposing Stalin. They also created fear among the people as they were afraid of the consequences that they might have to face. In the end, under industrialisation and collectivisation, industry and agriculture was successfully modernised which allowed increase in production. However, the production figures were manipulated by the workers in fear of punishment and the state to project an image of success of the economic policies, which made the people believe that they are benefitting from Stalin?s rule. ...read more.