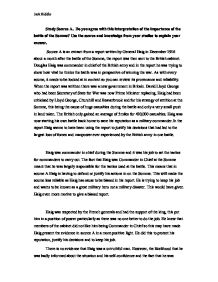 Study Source A. Do you agree with this interpretation of the importance of the battle of the Somme? Use the source and knowledge from your studies to explain your answer.

Study Source A.  Do you agree with this interpretation of the importance of the battle of the Somme? Use the source and knowledge from your studies to explain your answer.

Source A is an extract from a report written by General Haig in December 1916 about a month after the battle of the Somme, the report was then sent to the British cabinet. Douglas Haig was commander in chief of the British army and in the report he was trying to show how vital he thinks the battle was in perspective of winning the war. As with every source, it needs to be looked at in context so you can review its provenance and reliability. When the report was writhen there was a new government in Britain. David Lloyd George who had been Secretary of State for War was now Prime Minister replacing. Haig had been criticised by Lloyd George, Churchill and Beaverbrook and for his strategy of attrition at the Somme, this being the cause of huge casualties during the battle and only a very small push in land taken. The British only gained an average of 5miles for 420,000 casualties. Haig was now starting his own battle back home to save his reputation as a military commander.In the report Haig seems to have been using the report to justify his decisions that had led to the largest loss of forces and manpower ever experienced by the British army in one battle.

Haig was commander in chief during the Somme and it was his job to set the tactics for commanders to carry out. The fact that Haig was Commander in Chief at the Somme meant that he was largely responsible for the tactics used at the battle. This means that in source A Haig is having to defend or justify his actions in on the Somme. This will make the source less reliable as Haig has cause to be biased in his report. He is trying to keep his job and wants to be known as a great military hero not a military disaster. This would have given Haig even more motive to give a biased report.

Haig was respected by the French generals and had the support of the king, this put him in a position of power particularly as there was no one better to do the job. He knew that members of the cabinet did not like him being Commander in Chief so this may have made Haig present the evidence in source A in a more positive light. He did this to protect his reputation, justify his decisions and to keep his job.

There is no evidence that Haig was a untruthful man. However, the likelihood that he was badly informed about the situation and his self-confidence and the fact that he was wanting to protect his reputation and job mean that Haig could be biased in his report and his reliability as a source can be doubted.

Haig admits that, ‘the amount of ground we have gained is not great’ which is true but he then says, ’That is nothing’. Even before the Somme, Haig had been more concerned with a strategy of attrition so. Haig was expecting his strategy to have large casualties but the public wanted a justification of why so many lives had been lost. Even though the German army had been disconnected from ‘strong defensive positions’ the cost was very high and the Germans had often retreated to equally strong defensive positions. Haig was presenting only part of the situation. He is doing this to put himself in a positive light. Because he wants to keep his job and be seen as a public hero rather than villain.

However writing about the Somme in 1919 the German General Ludendorff wrote;

‘We had heavy losses in men and material. As a result of the Somme we were completely exhausted on the western front.’

This German quote supports Haig’s opinion of the effect of the Somme on the troops in the German army. Other than reports from captured prisoners its unclear how he can have been sure of this at the time. Whilst he has not lied in the report, Haig might be seen as guilty of laying out the information in a way that isn’t completely truthful. Also he has been discriminatory by only mentioning the upbeat information. Perhaps the principal thing wrong with the extract is it not showing the impact of the Somme on the British troops, but this would have undermined his argument because this would have showed the down side of the war and therefore not put Haig in a positive light. In conclusion, it appears that in the extract Haig is justifying his strategy of attrition at the Somme by showing the significance of the battle, for demonstrating the might of the British army, and its role in the destruction of the German army. Haig is reasonable in his view. It seems from the Reich archive that the affect on the German army from the Somme was great but nevertheless they still fought on for 2years. There are a number of key reasons why the Somme was important. It helped the French defence of Verdun and allied relations. It was a trial for new technologies in warfare such as tanks, machine guns and planes. Before the Somme, Kitchener’s volunteer army had been amateurs and inexperienced. After the Somme, they were a force of battle hardened experienced troops. The objectives that were achieved through the Somme were done through a strategy that cost many lives and unfortunately many errors made the battle longer. There is no way of telling whether the same things could have been achieved using different tactics. Haig was writing his report to people who were hostile to him and his strategy. He believed in his strategy and his ability to win the war, he was also worried about defending his reputation and job.

His original aim was to wear down the German army in a war of attrition. From his view he achieved his aim so it is understandable why he wrote what he did. It is my view that what he said he achieved was important but even as an report to the British government themselves it presents a biased view because Haig has all the motive to be biased.