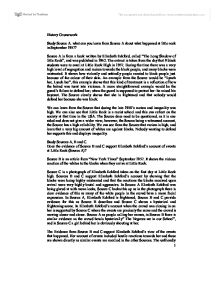 Study Source A, The Long Shadow of little Rock . What can you learn from Source A about what happened at Little Rock in September 1957??

History Coursework Study Source A. what can you learn from Source A about what happened at little rock in September 1957? Source A is from a book written by Elizabeth Eckford, called "The Long Shadow of little Rock", and was published in 1962. The extract is taken from the day that 9 black students were to enrol at Little Rock High in 1957. During the time there was a very high level of segregation and racism towards the black people, and many blacks were mistreated. It shows how violently and unkindly people reacted to black people just because of the colour of their skin. An example from the Source would be "Lynch her, Lynch her", this example shows that this kind of treatment is a reflection of how the hatred was turnt into violence. A more straightforward example would be the guard's failure to defend her; when the guard is supposed to protect her: he raised his bayonet. The Source clearly shows that she is frightened and that nobody would defend her because she was black. We can learn from the Source that during the late 1950's racism and inequality was high. We can also see that Little Rock is a racist school and this can reflect on the society at that time in the USA. The Source does need to be questioned, as it is one sided and does not give a wider view; however, the Source being a witnessed account, the Source has a high reliability. We can see from the Source that racism is high, and learn that a very big amount of whites are against blacks. ...read more.

Source F is the opinion poll results for the years 1961-1964, it shows the public view on the most important problem being faced by the country. Source G is a photograph from Birmingham Alabama, May 1963. It shows Civil Rights protesters being dragged away by power hoses. Source H is from a school history book, written in the 1980's. It shows how Martin Luther King's non-violent campaign came into conflict with the police. It also shows how these events were reported and aired on television, and that the previously indifferent whites were now appalled and sickened by the hostility of the police. Throughout this question I will show how Sources G and H support the changes in public opinion shown in Source F. In 1961 the most important problems being faced by the Americans were prices and inflation. This was most likely related to the consumer society which was growing at a very high rate at the time. In 1962 the main problem being faced had changed rapidly into war, peace and international problems. This was because there was a huge threat of nuclear war breaking out, due to the Cuban Missile Crisis. 1962 was a time in the Cold war where the relations between USA and USSR were very hostile. The Cuban Missile Crisis was the most important event in the cold war as a nuclear war was very close to happening. The main causes of the crisis were USA breaking off all diplomatic relations with Cuba. Relations between Castro the Cuban leader and America were also deteriorating. Castro was feeling threatened by America, so he asked the USSR for help. ...read more.

International relations between the USA and the USSR were also influential in the ending of segregation. USA wanted to show USSR that America was a democracy and that it was good to its country and its people. Therefore if any problems arose: the inequality and segregation, America would not look good. USA would be shown in bad light and reflect that America could not deal with domestic problems. This would not be good for America and for that reason USA needed to put a stop to segregation. In conclusion TV was very important in comparison to other factors. I believe that it was the most influential. Television passed on the abuse that the blacks were receiving more than anything else. The congress did not want to act beforehand because it did not find it such a problem. Only when the public of America saw what was happening, and was shocked, sickened and no longer indifferent to the situation, Congress began to act. The Civil Right Act was only introduced in 1964, and in 1963 it was when the worst of the abuse was shown to the public: e.g. the Birmingham protests. Source F supports the fact that opinions quickly changed from 1962 into 1963 from international problems into racial problems, this reflects that the American public was deeply concerned about what was happening during this time. I agree with Source I that television had a very crucial part in ending segregation in the USA. The source needs to be questioned as it is biased because it comes from the NBC and that would be the view of someone from the media. However television was the most significant and this had been proved throughout. Nataliya Charnetski, 9A ?? ?? ?? ?? 1 ...read more.