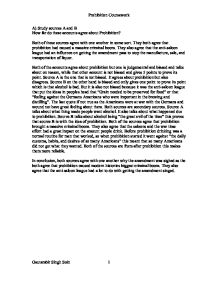 Study sources C and D Were the artists of these two posters for or against Prohibition?

A) Study sources A and B How far do these accounts agree about Prohibition? Both of these sources agree with one another in some sort. They both agree that prohibition had caused a massive criminal boom. They also agree that the anti-saloon league had an influence on getting the amendment pass to stop the manufacture, sale, and transportation of liquor. Both of the accounts agree about prohibition but one is judgemental and biased and talks about on reason, while that other account is not biased and gives 5 points to prove its point. Source A is the one that is not biased. It agrees about prohibition but also disagrees. Source B on the other hand is biased and only gives one point to prove its point which is that alcohol is bad. But it is also not biased because it was the anti-saloon league that put the ideas in peoples head that "Grain needed to be preserved for food" or that "feeling against the Germans Americans who were important in the brewing and distilling". The last quote if not true as the Americans were at war with the Germans and wound not have great feeling about them. Both sources are secondary sources. Source A talks about what thing made people want alcohol. It also talks about what happened due to prohibition. Source B talks about alcohol being "the great evil of the time" this proves that source B is with the idea of prohibition. Both of the sources agree that prohibition brought a massive criminal boom. They also agree that the saloons and the war time effort had a great impact on the amount people drink. Before prohibition drinking was a normal routine for men that worked, so when prohibition started it went against "the daily customs, habits, and desires of so many Americans" this meant that so many Americans did not get what they wanted. ...read more.

Also in 1921 25% of total still stated were seized. In 1925 82% were and in 1929 88% were. This shows a gradual climb but it also shows that after 1925 that rate that still were being seized at slowed down. The difference between 1921 and 1925 was 57% but after 1925 it was only 6%. This suggests that at first prohibition worked well and that it looked like it was going to work but later people were getting better at hiding the alcohol. However it also suggests that police men and people that were meant to enforce prohibition became corrupt and turned a blind eye to the people doing the illegal work. Source H shows all of the arrests for drunk-related incidents from 1920-1925. The amount of arrests for people being drunk increased. This might sound like Prohibition was being successful but it was not, as there are more arrests that must mean that more people were drinking and which means Prohibition was not successful. Also like in source G the rate increases rapidly and then eases off suggesting that people were getting good at hiding the alcohol or that police men and prohibition officers are turning a blind eye and becoming corrupt. The amount of drunk drivers is not of any use as cars had only come out and not many people had them so this statistic proves nothing. Altogether, the amount of arrests increases which means it was not successful due to the fact that there was more alcohol available. This source does not prove that Prohibition was a success because the numbers kept increasing which means the amount of alcohol increased so Prohibition did not work. It could be seen as success in that it is evidence that people were being prosecuted. In conclusion, these sources prove that Prohibition was not a success because the amount of stills was too small as the amount of stills there actually was, increased. ...read more.

Also the corruption went so high up in the ranks that all the Prohibition agents were involved. 'It was a conspiracy and my superior officers were involved in it'. This corroborates the fact that the corruption was within the higher ranks and if the government was bribed therefore how was it going to work? However, there other sources are against the view that Prohibition was going to fail. Source B illustrates that there were some groups that were for Prohibition like he 'Anti-Saloon League' and 'Women's Christian Temperance'. There were many groups and many people wanted it so it shows that it might have had a chance to succeed. Source C and D are against the fact that Prohibition was going to fail due to many reasons. They both explain to the public why Prohibition should be in place. They both also show the things that could happen to the family due to the fact that the men would waste all their money in alcohol. Source F is also against it due to many reasons. Some of the Prohibition officers did not give up which motivated some of the people. The writer also says that 'where it is not obeyed it will be enforced.' This shows signs of positive things in Prohibition. This source could also be biased because it is speech to the public and he does not want to say that it will not work. In conclusion, I believe that even with the support of some campaigning groups it was bound to fail because it went against peoples daily things and were not willing to change that. Prohibition did not only affect drinkers but it brought violence in America that it had never been seen before, through gangsters. It bought gangsters such Al Capone and Dutch Schulz this shows that the corruption did not allow Prohibition to work properly therefore it was bound to fail. Also without the right amount of officers it was going to fail. So therefore, the failure of Prohibition was inevitable. ?? ?? ?? ?? Prohibition Coursework Gautambir Singh Soin 1 ...read more.