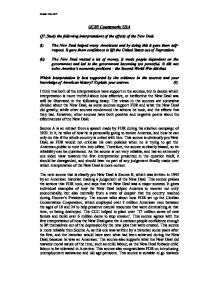 Study the following interpretations of the effects of the New Deal. The New Deal helped many Americans and by doing this it gave them self-respect. It gave them confidence to lift the United States out of Depression.

GCSE Coursework: USA Q7. Study the following interpretations of the effects of the New Deal. (i) The New Deal helped many Americans and by doing this it gave them self-respect. It gave them confidence to lift the United States out of Depression. (ii) The New Deal wasted a lot of money, it made people dependent on the government and led to the government becoming too powerful. It did not solve America's economic problems - the Second World War did that. Which interpretation is best supported by the evidence in the sources and your knowledge of American history? Explain your answer. (9) I think that both of the interpretations have support in the sources, but to decide which interpretation is more truthful about how effective, or ineffective the New Deal was will be illustrated in the following essay. The views in the sources are somewhat divided about the New Deal, as some sources support FDR and what the New Deal did greatly, while other sources condemned the actions he took, and the effects that they had. However, other sources have both positive and negative points about the effectiveness of the New Deal. Source A is an extract from a speech made by FDR during his election campaign of 1932. In it, he talks of how he is personally going to restore America, and how he can only do this if the whole country is united with him. This source is obviously pro New Deal, as FDR would not criticise his own policies when he is trying to get the American public to vote him into office. Therefore, the source is clearly biased, so its reliability can be questioned. As the source is not very reliable, and has an extremely one sided view towards the first interpretation presented in the question itself, it should be disregarded, and should bear no part of any judgement finally made over which interpretation of the New Deal is more correct. ...read more.

This source is clearly biased, as someone who was part of the New Deal would obviously give it praise, so this source should also be disregarded from the final judgement. The second interpretation is supported by Source C, which heavily criticises the New Deal, and FDR and how he didn't really help solve America's problems. The source is an extract from a book called 'The Roosevelt Myth', written by an American historian and published in 1945. The book was obviously written to try and change the opinion people had about FDR after his death in 1945,as it was entitled to make people read it, and find out about how FDR wasn't really a saviour, as some people still thought he was. This source agrees totally with the second interpretation of the New Deal, which says that a lot of money was wasted, the government became too powerful and interventionist into people's lives, and that the Second World War is what really saved America's economy, not the New Deal. The quotation 'By leading his country into war he was able to put every man and woman into work', which increased public spending and the 'Multiplier Effect' that FDR thought would save the economy worked, not from government assistance, but from the war providing employment. This employment restored the self-esteem of the people, and the war united the country against fighting a common enemy, which also helped their confidence. This source is reasonably reliable, even though it was written by someone who potentially wanted to damage FDR's reputation. The source points out the mistakes in the New Deal, and gives evidence for the second interpretation from the quotation 'Congress gave up much of its power to Roosevelt when it put billions of dollars into his hands'. The person who wrote the source does not have any direct connection with FDR as far as we know, so we can assume that the source is quite reliable. ...read more.

I also think that some of the money was wasted when FDR gave 'boondoggles' (pointless jobs) to people to try to motivate them into going out and finding a real job once their self-confidence had returned. I also agree that the government became too powerful, mainly the Executive branch, and intervened too much into the lives of the people. There is support for this in Source G, which shows FDR as being a strong man, while Congress is shown as a frail woman. The New Deal did help people for a short time, when unemployment was on its way down, but unemployment never dropped below 7.5 million. The benefits that the New Deal handed out did potentially save a lot of people from starvation. However, only in 1941 did the country return to full employment, as the War provided jobs for people. The economic problems that plagued America at the start of FDR's Presidency were still plaguing the country at the abrupt end of his Presidency. The major problem that America faced was the 'vicious circle'. The circle started during the time when Hoover was still President with the internal American market being saturated with American goods due to the heavy tariffs that were established against foreign goods. The saturated markets led to falling company profits, which led to job losses. This led on to less money being spent in the US economy, which meant that fewer goods were produced. This led to company profits falling even more, and the circle continues that way. This major economic problem was cured by the Second World War. The War injected foreign money into the economy, which helped break the circle. This money came from countries trading with one another, and the buying and selling of arms and other forms of weaponry. The Second World War helped to rejuvenate the American economy - something FDR and the New Deal hadn't been able to do for over a decade. Pratik Vats 10T ...read more.