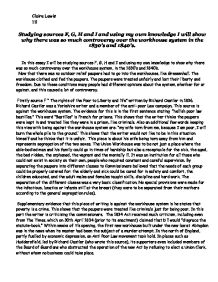 Studying sources F, G, H and I and using my own knowledge I will show why there was so much controversy over the workhouse system in the 1830's and 1840's.

This source also tells us 'the aged, infirm & sick continue to receive outdoor relief, and in some cases the amount they receive has increased.' By linking this statement and the last, this tells us that the writer believes that only the deserving poor should get the outdoor relief. This system of relief allowed the poor to remain in their own homes. As attitudes changed, the poor were often viewed as idle, and it was believed that employers paid deliberately low wages knowing that the parish or Union would make them up. It was felt that expenditure on outdoor relief was too high and under the New Poor Law changes were made which almost abolished this system of relief. Additional evidence that this source is supporting the workhouse system is that it says,' one of the main advantages of placing destitute families in the workhouse in that the children are educated.' This shows that the writer believes that putting poor families into the workhouses also help their children by giving them an education. The educational policy of the workhouse was summed up by the master of the Ennistymon workhouse in his report to the guardians on the 14th June 1844 ". The aim is, children to be useful and respectable members of society, the course of education such as that will require is not limited to reading, writing and arithmetic, but it likewise comprises careful moral and religious instruction as well as training in habits of industry. ...read more.

Bone crushing became the focus of a case, which was reported extensively by The Times and was followed avidly by the public Edwin Chadwick emerged particularly well and reached the height of his prestige and power at this time. Andover was only the most notorious example of workhouse cruelty. There were several other major scandals and incidents, all recorded by the press in minute detail. Inflicted cruel punishments on those under his rule. Some inmates were forced to spend the night in the workhouse mortuary as a punishment. The report of the select committee found that the workhouse master was unfit. He was forced to resign. The Andover scandal was an extreme example of how workhouse system could produce horrific results. This case was unforgivable but was untypical. Many of the other alleged bad workhouses were other exaggerated. For this evidence I have found I conclude or that in my opinion that the workhouse was not a very nice place to be in. Also I can see why there was so much controversy over the workhouse system. I think that the workhouse was good in the sense that the children got a good education for the future, and taught the basic skills they would need. On the other hand, for the adult paupers life was poor, due to the living and working condition. Although there are reasons for both, supporting and being against the workhouses, I think that the reasons to be against the workhouse system outweighs the reasons for supporting it. Claire Lewis 11l ...read more.