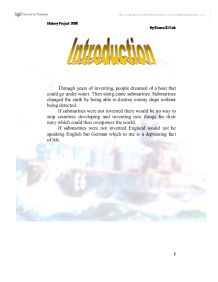 Through years of inventing, people dreamed of a boat that could go under water. Then along came submarines. Submarines changed the earth by being able to destroy enemy ships without being detected. If submarines were not invented there would be no way to stop countries developing and inventing new things for their navy which could then overpower the world. If submarines were not invented England would not be speaking English but German which to me is a depressing fact of life. Trial and Error Through the years people on Earth have dreamed to have an underwater machine not detected on the surface of the water. Since Alexander the Great was lowered into the sea in a glass sealed container in 337BC no attempts were made until 1578. There was then a scientist called Cornelius Drebbel who was the best known inventor around the time. He tried to build a completely submersible submarine. His submarine was very simple. It was a boat with raised sides with a leather greased top to stop the water getting in the submarine. The fascination of underwater machines started to get to the inventors of the world. The Naval captains seemed not to be interested in submersible boats until the American war of independence in 1775-83 when a young man called David Bushnell invented a fully submersible machine which he called The Turtle. The Turtle was built of wood in an egg shape. The machine was powered by a hand cranked propeller. The next step of the invention of submarines came in 1800 when Robert Fulton an American artist or an inventor built a Nautilus. This is a copper covered submersible which has a collapsible sail. Born in Little Britain which is now called Fulton, he went to England as a young man to study painting. He then turned his drawings into inventions. In 1796 he travelled to France where Napoleon ordered him to build his submarine. ...read more.

Rice also made sure that Holland came up with a plan which would win. The boat was 17m long. It was powered by a petrol engine on the surface and electricity under water. The United States government in April 1900 began to buy a prototype for $165,000 from the newly renamed electric boat company. Rice then travelled to London, armed with the knowledge. Rice went to the admiral and gave very good news of the trials of Holland's submarine. The admiral then joined the submarine age when Holland's submarine sank a battle cruiser in the middle of the sea. The British then proudly agreed to buy five of Holland's submarines for 40 thousand pounds each. This was a lot in 1900. In the deal Rice had sold all of Holland's plans to build submarines so in the end Holland retired. Holland died and as his electric boat company went on to be the biggest producers of submarines in England. After this the British were to get their first submarine fleet. This persuaded the admiral to think the submarines were only experimental and they were for needed purposes only. The first lord of the admiralty then began to hate submarines and this negative view changed everyone's views overnight. In 1901 a dummy torpedo hit a French ship and this was a huge hit in the newspapers. The torpedo was fired from a brand new French submarine. For England the dash was on to build submarines when they heard the news because they knew submarines could do some damage if in the right hands. Towards the world war: Dash to build. At the beginning of the 20th century too many people believed that it was simply unthinkable to have dark vessels under the water ready to sink any magnificent sea worthy ships. Sir Arthur Wilson said this was 'damned un-English... certainly no occupation for a gentleman submarine crew, if captured should be hung as pirates'. ...read more.

They are remote control and take pictures of the underwater side of the submarine and can never return because they run out of fuel and are collected. This submarine has a fire power of 23-24 torpedo tubes. These tubes can reload every 20 seconds. They are the quickest submarine to reload. It cannot be told how many torpedoes it has because it is still in use. All of the new submarines have a recorded sound of their propeller so if they are in the middle of the Atlantic Ocean they can still be tracked. The Americans planted lots of receivers on the bottom of the sea so if there is a submarine in that sea it will be found. Submarines were in use in Iraq when we thought Saddam Hussein had a massive weapon. The submarines did not have to fire. They had to scare Saddam. These modern submarines have mini tubes to scare the enemy with a dummy missile so they retreat and do not attract too much attention to themselves. The new submarines have to have the minimum sound level and the maximum speed under the water. To bring an end to the main body I have to show you what one of the 200 missiles in a modern submarine can do on its own. Below is the biggest missile going off which has ever been set off. Submarines have changed the world in the biggest way ever. They can stay under water for 4 months without surfacing. If another country ever launched a bomb to be set off, America which is the biggest power in the world would launch a submarine there so it would stop. These submarines are a deterrent to war. They stop war where it could break out. Submarines won England the First and Second World War. Submarines are the best invention in the world I think. I chose submarines because they are the most important invention in the world. I think they are stopping a Third World War which is a big thing to say I think. ...read more.