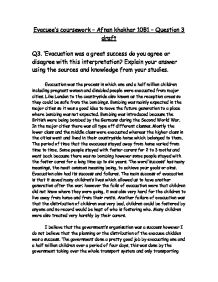 Evacuee's coursework - Afnan khokhar 10B1 - Question 3 draft Q3. 'Evacuation was a great success do you agree or disagree with this interpretation? Explain your answer using the sources and knowledge from your studies. Evacuation was the process in which one and a half million children including pregnant women and disabled people were evacuated from major cities. Like London to the countryside also known as the reception areas so they could be safe from the bombings. Bombing was mainly expected in the major cities so it was a good idea to move the future generation to a place where bombing was not expected. Bombing was introduced because the British were being bombed by the Germans during the Second World War. In the major cities there was all type off different classes. Mostly the lower class and the middle class were evacuated whereas the higher class in the cities went and lived in their countryside home which belonged to them. The period of time that the evacuees stayed away from home varied from time to time. Some people stayed with foster carers for 2 to 3 moths and went back because there was no bombing however some people stayed with the foster cares for a long time up to six years. The word 'success' has many meanings, the most common meaning being, to achieve your goals or aims. Evacuation also had its success and failures. The main success of evacuation is that it saved many children's lives which allowed us to have another generation after the war; however the fails of evacuation were that ...read more.

Source C talks about children being evacuated and also about how they and their mothers felt. The interview took place in 1988 making it a secondary source because it was written after evacuation took place. Because the interview was taken after a long time after evacuation it may be unreliable because her views may be affected by hindsight, the source may also be unreliable because it is one persons point of view. Looking at source C I can learn that it shows the evacuation was a failure. 'Children were too afraid too talk. . . . . . . We hadn't the slightest idea where we were going. . . . . . The mothers pressed against the iron gates calling goodbye darling.' From this I can learn the children were not comfortable because they were too afraid too talk. I can also learn that there was lack organisation because no one knew where they were going. This source is an objective source because e in the source it does state about the source being on time. Overall source C shows that evacuation was a failure. The main purpose of the source was to show how children and mothers felt about evacuation. Source 'E' is also an interview with a mother of the host family. The mother looks back and remembers what the evacuees were like. 'The children went around urinating on the walls; although we had toilets they never used them.' From this we can learn that the evacuees had very poor hygiene. ...read more.