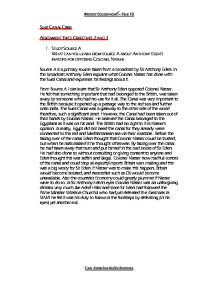 SUEZ CANAL CRISIS ASSIGNMENT TWO: OBJECTIVES 2 AND 3 1. STUDY SOURCE A WHAT CAN YOU LEARN FROM SOURCE A ABOUT ANTHONY EDEN'S REASONS FOR OPPOSING COLONEL NASSER. Source A is a primary source taken from a broadcast by Sir Anthony Eden. In the broadcast Anthony Eden explains what Colonel Nasser has done with the Suez Canal and expresses his feelings about it. From Source A I can learn that Sir Anthony Eden opposed Colonel Nasser. He felt that something important that had belonged to the British, was taken away by someone who had no-use for it all. The Canal was very important to the British because it opened up a passage way to the red sea and further onto India. The Suez Canal was a gateway to the other side of the world therefore, such a significant asset. However, the Canal had been taken out of their hands by Colonel Nasser. He believed the Canal belonged to the Egyptians as it was on his land. The British had no right to it in Nasser's opinion. In reality, Egypt did not need the canal for they already were connected to the red and Mediterranean sea via their coastline. Before the taking over of the canal Eden thought that Colonel Nasser could be trusted, but when he nationalised it he thought otherwise. ...read more.

It cannot display the whole public opinion because it only shows a small portion of people and they cannot possibly represent an entire population. Source F is two small extracts of letters from readers, which had been published in the Daily Mirror. The extracts show the view of two random readers who had decided to show their opinion on the Suez Crisis. The first extract says that we have no right to assume that Nasser is going to do something bad. Of course, at this point the only thing Nasser had done was to nationalise what he believed should be his country's, and partly damaged Sir Anthony Eden's Ego. He had not killed anybody. I think that the first extract is from a person who I believe is not against the use of military action to remove Nasser, but sees no problem in what Nasser has done. And therefore sees no reason to use it. The second extract talks about the morality of applying military action. That it is completely wrong and should not happen. It is clearly evident that both readers think that there are other ways to treat Colonel Nasser instead of using Colonel Nasser. After analysing these pieces of evidence, I can see that the general public did not want another war. However, they saw that Eden's decisions could quickly produce a new conflict. ...read more.

The signs in source E clearly show the displeasure the public had for Eden's words and opposition to him must have soared. Nasser on the other hand was being praised by the people in his country. Sources B and C show the support he had. And the removal of hats in Source B shows the respect the people had for him. Britain, a country hating their prime minister, was attacking Egypt who loved theirs, all because the British one did not like the Egyptian one. This definitely would have made the British look like total fools to the international eyes. Also the Egyptians themselves did not see Nasser as a bad figure. After the crisis Nasser was perceived as the hero and winner, this heightened his status as the leader of the Arab world. The Reaction to Anthony Eden was completely different. Sir Anthony Eden reacted harshly, and this made the British people angry, not happy. Anthony Eden had humiliated himself and his party and the fact that he stepped down in 1957 before the end of the war, was due to the fact that he could not cope with the pressure which was being laid onto him by international opinion. He was forced to step down and was seen as a failure. It was not Britain, who had been humiliated; it was the prime minister. ?? ?? ?? ?? HISTORY COURSEWORK - YEAR 10 CARL JOSEF-IAN NU�EZ RENDORA ...read more.