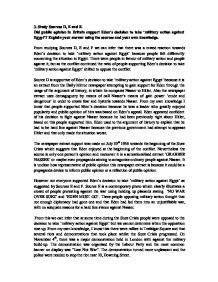 Both Eden and Lloyd concur that Nasser was a dangerous threat and menace, Source G agrees with Source H because they both refer to the argument of history and compare Nasser to previous dictator which have caused international problem. Both the sources suggest Eden's primary motives for opposing Nasser were to eliminate him and to establish regime change in Egypt. Source H states that their objectives were to prevent war in the Middle East, to deal with Nasser and to establish international control over the Suez Canal. Selwyn Lloyd uses these reasons to justify Eden's actions claiming that it was in national interest and that they did what they thought was right at the time. Source G offers support because Eden suggests that they need to establish international control of the Suez Canal which agrees with Lloyd's extract. In conclusion Source does support Selwyn Lloyd's statement Britain's motives for military action against Egypt because they both agree that the primary motives were to establish international control over the Suez Canal and to make a regime change. Both of the sources identify Nasser as a menace and by referring to the argument of history state that he needs to be dealt with and a new regime should be in place. ...read more.

So he (Eisenhower) felt that in effect, Eden was living in the past. General Andrew Goodpastor, the Chief of Staff to Eisenhower at the time of Suez The Suez Crisis had devastating effects on the British economy because the value of sterling continued to depreciate at an increasing rate and the effects was only softened by relying on aid from the USA. Additionally, Britain's evident weakness led to the commonwealth to crumble at an increasing rate because Britain was a paper tiger with limited power to stop the small nations from braking away from the British Empire. The Suez Crisis became the trigger for the dismantling of the British Empire because soon after the conflict ended Malaya and Ghana both claimed independence from the British in 1957. After this the chains of countries which made the British Empire continued to break away but this process was started at Suez. In conclusion, Britain was humiliated by international opinion and made to look foolish but it became a personal humiliation for Eden and his Cabinet. Moreover Britain was forced to reassess its position in the world stand and realise that it could not act without the full support and backing of the new superpower of the world, the USA. ?? ?? ?? ?? ...read more.