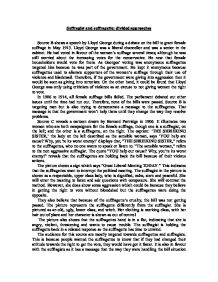 Suffragist and suffragette; divided approaches Source B shows a speech by Lloyd George during a debate on the bill to grant female suffrage in May 1913. Lloyd George was a liberal chancellor and was a senior in the cabinet. He had voted in favour of the women's suffrage several times; although he was still worried about the increasing votes for the conservative. He new that female householders would vote for them. As Georges' voting was anonymous suffragettes targeted him because he was part of the government. He kept it anonymous because suffragettes used to alienate supporters of the women's suffrage through their use of violence and blackmail. ...read more.

It illustrates two women who are both campaigners for the female suffrage, though one is a suffragist, on the left; and the other is a suffragette, on the right. The caption: 'THE SHRIEKING SISTER,' the lady on the left described as the sensible woman, says 'YOU help are cause? Why, you're its worst enemy!' displays that, "THE SHRIEKING SISTER," refers to the suffragettes, who no one wants to speak or listen to. "The sensible woman," refers to the non aggressive suffragist. The quote "YOU help our cause? Why, you're its worst enemy!" reveals that the suffragettes are holding back the bill because of their vicious actions. ...read more.

The picture also shows that the suffragettes hand is in a fist, indicating that she is angry, violent, threatening and wants to cause trouble. The suffragist is holding the suffragette back in a relaxed response so the suffragette has time to unwind. The audience for this source are mostly targeted towards suffragettes and suffragists. This is because people wanted the suffragettes to know that if they had changed their attitude towards the right to get the vote, they would have got it faster. It is also in favour with the suffragists as it has a message that the way they were handling the bill situation as the appropriate procedure. Bernard wants the suffragettes to acknowledge that they need to change there approach to get what they want effectively. ?? ?? ?? ?? ...read more.