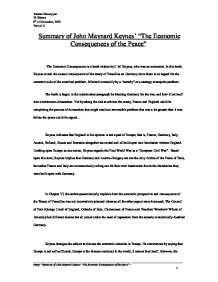 Summary of John Maynard Keynes' "The Economic Consequences of the Peace" "The Economic Consequences is a book written by J. M. Keynes, who was an economist. In this book, Keynes reveal the unseen consequence of the treaty of Versailles on Germany since there is no regard for the economic side of the unsolved problem, followed eventually by a "remedy" or a strategy to stop the problem. The book is begun in the introductory paragraph by blaming Germany for the war, and how it led itself into a continuous devastation. Yet by taking the risk to achieve the treaty, France and England could be completing the process of devastation that might result an irreversible problem that was a lot greater than it was before the peace could be signed... Keynes indicates that England in his opinion is not a part of Europe; that is, France, Germany, Italy, Austria, Holland, Russia and Romania altogether are united and all built upon one foundation without England. Looking upon Europe as one nation, Keynes regards the First World War as a "European Civil War". Based upon this term, Keynes implies that Germany and Austria-Hungary are not the only victims of the Peace of Paris, but rather France and Italy are unconsciously calling out for their own destruction due to the foundation they were built upon with Germany. ...read more.

And, according to Keynes, Lenin was right. "Equilibrium of wealth is an inevitable result of the inflation, but they have no plan for replacing it", Keynes said. Capitalists allow themselves to be ruined by their instrument, governments.. etc. Inflation is dramatically increasing in Europe; in Germany (1 Mark = less than 1 cent), in Italy it's fallen down to its half, France is living in an uncertainty. But they never lost their value for the world beyond. But amongst the nation, the currency is a worthless piece of paper... But even so, the problem is found in foreign trade. The price of imported commodities, when converted at a current rate of exchange, is far in excess of the local price cannot be imported by the private agencies and must be given by the government due to the lack of a chance to trade. Keynes divides Europe into two groups: one that cannot import due to the Blockade (Germany) and one that cannot import except with the help of the allies (Italy). There are three separate obstacles to the resumption of the trade; imbalance in the internal prices and international price due the currency price difference amongst the nation, few credit abroad for the individual and disordered currency system due to the increasing note circulation. In France, money circulation is 6 times more than it was before the war, and the exporting rate is 40% percent less; France imports are a lot more than the exports. ...read more.

That is to say that Europe will stop prospering unless the debts are cancelled. Europe must not depend on the largesse of the States, rather than on its own labor. An International Loan Restoration and economic refreshment cannot be done without the excess aid of the United States, and shall be involved in the European affairs. If America remembers what Europe meant to her the mother of art and knowledge would interest herself in to prove decisive issues for the civilization of mankind? Expenditure out of the loan should be the subject to general, but not detailed supervision by the leading countries. Relations of Central Europe to Russia The union of forces between Russia and Germany are looked upon greatly and its efficiency and effectiveness of the unity is unthinkable. Besides, a new military power establishing itself in the east with its spiritual home in Brandenburg, drawing to itself all the military talent and all the military adventurers who regret democracy. Before the war, Western and Central Europe imported a great amount of its cereals from Russia. In 1980, Russia's productivity greatly increased and it would be foolish, then, to impose a blockade on Russia. Keynes warns then that detailed opposition of Germany or Russia, Europe must be prepared to expect the consequences of the feelings. The rest is now up to the world... Yazeed Abunayyan IB History 8th of November, 2003 Period: D ___________________________________________________________________________Essay: "Summary of John Maynard Keynes' "The Economic Consequences of the Peace"". 1 ...read more.