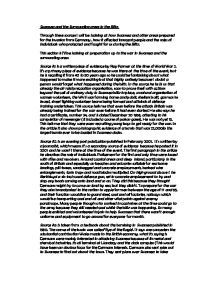 swansea and the Blits version 2

Swansea and the Surrounding areas in the Blitz. Through these sources I will be looking at how Swansea and other areas prepared for the invasion from Germany, how it affected innocent people and the roles of individuals who protected and fought for us during the Blitz. This section is I'll be looking at preparation up to the war in Swansea and the surrounding area. Source A1 is a written piece of evidence by Ray Farmer at the time of World War 2. It's a primary piece of evidence because he was there at the time of the event, but he is recalling it from 40 to 50 years ago so he could be fantasising about what happened to make it more exciting but that highly unlikely because I doubt a person would forget what happened during the blitz. In the source he tells us that already the air raid precaution organisation, soon to prove itself with actions beyond the call of ordinary duty in Swansea blitz in place, a natural organisation of women volunteers, the WVS was forming, home and public shelters built, gas masks issued, street fighting volunteer teams being formed and all kinds of defence training undertaken. This source tells me that even before the attack Britain was already being trained for the war even before it had even started. He also says he had a certificate, number 34, and is dated December 20 1938, attesting to his completion of messenger (it included a course of poison gases). He was not yet 15. This tells me that they were even recruiting young boys to get ready for the war. In the article it also shows photographic evidence of a bomb that was 22,000lb the largest bomb ever to be loaded in Swansea docks. Source A2 is an evening post publication published in February 2001. It's written by a journalist, which means it's a secondary source of evidence because he posted it in 2001 and he wasn't there at the time of the event. ...read more.

This backs up source 2 because it show a picture of women at work and in this source Ivy is talking bout the jobs she had to do when her husband was away and that he'd normally have to do them jobs. Source 4 shows pictorial evidence of Air-Raid wardens taken from a textbook in 1988 called 'Memories of Swansea at was.' It shows lots of men dressed in hard gear meaning that their job is dangerous, there's lots of men (meaning many men volunteered to protect their country), also it shows a different variety of women in a range of different ages maybe around 16 to 60 something of age. This is useful because it shows how young people were also involved in the war. Source 5 is an evening post reporter interviewing two boys who remember the final bombing raid on Swansea, ET they are recalling events from over 50 years ago. It says 'Two Swansea men, teenagers at the time of the raid, 54 years ago this coming Sunday lived to tell the tale purely due to a double stroke of luck.' They were both two young boys, Alan Ayres had been Lord Mayor and Frank Bevan was Major during investiture Years- position far removed from their jobs as locomotive depot on the night of the final raid, because of their age and there now talking about it over 50 years ago there facts could be embellished but its highly unlikely they would, et the source is useful because the reporter is asking people about what happened to them during the was and what it was like for them. There tale begins once the pair were hurrying home after being released a few minutes early that day's 2pm until 10pm shift. As they headed into darkness they came aware of the familiar drone of the German bomber. Looking up, a break in the clouds confirmed their fear. ...read more.

Source 5A is pictorial evidence taken from an Evening Post Publication in February 2001. The picture is turned rubble, the once was bustling town centre of Swansea lies deserted and devastated after repeated enemy attacks, which saw many die and hundreds injured. This would have been a crowded area where loads of people would come to shop, resulting in to many lived lost and a long term damage on rebuilding the town back to what it would have been. It backs up source C5 where it talks about the long term damage on town and other public areas and that the Germans were bombing miles off there target! This source also backs up source A4 were it talks about what Swansea was like and it also shows dictatorial evidence of what it looked like before the bombing attacks and that after the long term damage and the rebuilding were done, now 60 years after few people cant recall the buildings of the old towns centre with great clarity. To conclude what I've found, I've noticed that Swansea was not et ready for what the Germans were going to do to are towns and villages but they knew it was coming sooner or later so they still did little things like shelters which saved many lives in 1939 to 1945 and that even though it left a long term affect it made Swansea town people care more about what they have and it improved the look and aspect of Swansea into a more improved town. Even though the Germans hit us hard we gave them 10 times more then what they gave us. Also I found that many people cared about protecting there community and others, because of the roles of individuals it made it helpful for people to find save places to stay if in danger and need of shelter. They saved many lives with there role but not all were saved, many lives were lost and some to be forgotten but without there brave enthusiasms many more would have died and Britain would have lost the War. Hayley Rachel Williams 11s ...read more.