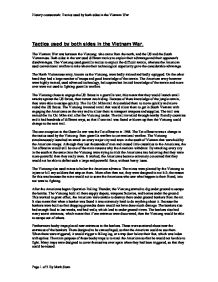 Tactics used by both sides in the Vietnam War.

Tactics used by both sides in the Vietnam War. The Vietnam War was between the Vietcong: who came from the north, and the US and the South Vietnamese. Both sides in the war used different tactics to exploit their advantage and their opponent's disadvantages. The Vietcong used guerrilla tactics to exploit the difficult terrain, whereas the American used conventional warfare to take where their technological superiority gave the considerable advantage. The North Vietnamese army, known as the Vietcong, were badly trained and badly equipped. On the other hand they had a large number of troops and good knowledge of the terrain. The American army however were highly trained, used advanced technology, helicopters but limited knowledge of the terrain and more over were not used to fighting guerrilla warfare. The Vietcong chose to engage the US forces in a guerrilla war, this meant that they would launch small attacks against the US forces, then retreat into hiding. Because of there knowledge of the jungle terrain, they were able to escape quickly. The Ho Chi Mihn trail this enabled them to move quickly and move round the US forces. The Vietcong invented a trail that would allow them to get in South Vietnam with engaging the Americans on the way and to allow them to transport weapons and supplies. ...read more.

The US army is one of the best trained in the world; they have the best technology, and are well equipped. However they are used to conventional warfare- head to head fighting, and they had poor knowledge of the terrain and the condition in Vietnam, e.g., the monsoons. The aim of Operation rolling thunder was to destroy the Vietcong's weapons depots and factories. They aimed to do this by "carpet bombing" from planes entire areas, to destroy anything in that area. Operation thunder in its earlier days had great success, large number of weapons, supplies and troops were destroyed. Without American lives being lost. However the Vietcong dug under the ground, making their entire factors underground. This meant that operation-rolling thunder became useless, as the bombs had no effect of the Vietcong bases. The US also adapted another technique, which used "mother bombs". These were extremely large bombs that were dropped of specific targets, such as weapons depots. There however were also rendered useless because of the Vietcongs movement under ground. Another use for planes in the war was defoliant. Defoliant was a substance such as Napalm or Agent Orange that would destroy all of the plants in a large area and destroyed places for the Vietcong to hide. This also allowed the US forces on the ground to move in open spaces, But with agent orange was later found out to be a factor that helped bring on cancer. ...read more.

As a result of more than eight years of these methods of warfare, it is estimated that more than 2 million Vietnamese were killed, 3 million wounded, and hundreds of thousands of children orphaned. It has been estimated that about 12 million Indochinese people became refugees. Between April 1975 and July 1982, approximately 1,218,000 were resettled in more than 16 countries. About 500,000, the so-called boat people, tried to flee Vietnam by sea; according to rough estimates, 10 to 15 percent of these died, and those who survived the great hardships of their voyages were eventually faced with entry ceilings in the countries that agreed to accept them for resettlement. In the Vietnam War U.S. casualties rose to a total of 57,685 killed and about 153,303 wounded. At the time of the cease-fire agreement there were 587 U.S. military and civilian prisoners of war, all of whom were subsequently released. A current unofficial estimate puts the number of personnel still unaccounted for in the neighborhood of 2500. Less measurable but still significant costs were the social conflicts within the U.S. that were engendered by the war-the questioning of U.S. institutions by the American people and a sense of self-doubt.1 1"Vietnam War," Microsoft(r) Encarta(r) 97 Encyclopedia. (c) 1993-1996 Microsoft Corporation. All rights reserved. History coursework: Tactics used by both sides in the Vietnam War Page 1 of 3 By Mark Stern ...read more.