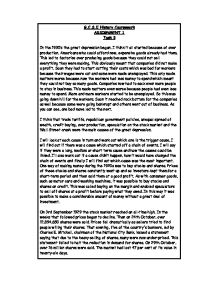 G.C.S.E History Coursework ASSIGNMENT 1 Task 3 In the 1930's the great depression began. I think it all started because of over production. Americans who could afford new, expensive goods already had them. This led to factories over producing goods because they could not sell everything they were making. This obviously meant that companies did not make a profit. Soon they had to start cutting their costs which was bad for workers because their wages were cut and some were made unemployed. This only made matters worse because now the workers had less money to spend which meant they could not buy so many goods. Companies now had to sack even more people to stay in business. This made matters even worse because people had even less money to spend. More and more workers started to be unemployed. So this was going down hill for the workers. Soon it reached rock bottom for the companies as well because some were going bankrupt and others went out of business. As you can see, one bad move led to the next. I think that trade tariffs, republican government policies, unequal spread of wealth, credit buying, over production, speculation on the stock market and the Wall Street crash were the main causes of the great depression. I will look at each cause in turn and work out which one is the trigger cause, I will find out if there was a cause which started off a chain of events. I will say if they were a long, medium or short term cause and how the causes could be linked. I'll also work out if a cause didn't happen, how it would have changed the chain of events and finally I will find out which cause was the most important. One way of making money during the 1920s was to buy stocks and shares. Prices of these stocks and shares constantly went up and so investors kept them for a short-term period and then sold them at a good profit. ...read more.

Farmers borrowed money, like many other Americans, from banks. They used this to buy new machinery, but many farmers were making too little to pay their debts. Over one million farmers were evicted from their farms during the 1920's and many more lived in poverty. Farmers made up a fairly large part of the population and another group (although many were also farmers) who also made up a large part of the population, were the black Americans who made up between 10 and 15% of the population. Millions of black people lived in the southern states such as Alabama. Nearly all blacks were too poor to buy consumer goods, as most were very poor farmers who were in debt. Most whites in America were very racist and did not think that equal rights for blacks should be allowed. The Ku Klux Klan was a very racist group who made sure that any blacks that tried to live a normal life, without living in poverty couldn't make any economic progress. The KKK and the racist Jim Crow laws put many restrictions on black people's freedom. Even after 1900 when black people moved into the north of the country they were still discriminated against and lived in ghetto areas such as Harlem in New York. Black people did not have equality and there was much truth in the saying that Negroes were "the last to be hired and the first to be fired." Even when they were doing the same jobs as whites they were getting worse wages, so the blacks and the farmers, the textile workers and the miners (who made up a large proportion of the country) could not even afford the consumer goods in the boom. America's foreign policies also helped to restrict the market for its goods by the immigration controls. Prior to 1922 America had welcomed immigrants who had been young, strong and ambitious people. ...read more.

Many of the other causes are inter-related, therefore it is hard to decide which is the most significant. I think that the protectionist policies were a key cause as it was obvious that the boom could not last forever on the sale of consumer goods in the USA, as people would no longer have a desire to buy more and more of the same items. Exporting the goods would have been a sensible suggestion. If the protectionist tariffs had not have been introduced, then Europe could have been better off and so could the USA. Then overproduction would not have been such a problem, as the goods the Americans didn't want could have been exported, the economy wouldn't have got worse so quickly and the boom could have lasted. Although the protectionist policies were problematic I think that the unequal distribution of wealth was a long term cause which played a very significant part in leading to the depression. If the Americans had have bought the goods to start with then there would have been no need to export them anyway. The boom was bound to come to an end some time, as a large proportion of the country (farmers, blacks, coal miners etc) could never afford the great new goods anyway. Only a small minority of the country could honestly afford the goods - the rest could not afford them or bought on credit and fooled themselves. This meant that when the minority had bought what they wanted, the surplus goods could not be sold to the blacks, farmers, miners, textile workers and the 60% of the country living below the poverty line, before exports were even thought about. If a larger percentage could have afforded these goods then the boom could have continued for longer. Overall, I would say that the depression was a result of many linked reasons, leading from a reason which had been present for years - the fact that there were far too many poor people and far too few rich people to keep the economic boom going. ...read more.