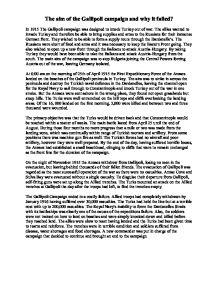 The aim of the Gallipoli campaign and why it failed?

The aim of the Gallipoli campaign and why it failed? In 1915 The Gallipoli campaign was designed to knock Turkey out of war. The allies wanted to invade Turkey and therefore be able to bring supplies and arms to the Russians for their immense German front. They wished to be able to form a supply route through the Dardanelle's. The Russians were short of food and arms and it was necessary to keep the Eastern Front going. They also wished to open up a new front through the Balkans to attack Austria-Hungary. By taking Turkey they would have been able to take the Balkans and attack Austria-Hungary from the south. ...read more.

Of the 16, 000 landed on the first morning, 2,000 were killed and between two and three thousand were wounded. The primary objective was that the Turks would be driven back and that Constantinople would be reached within a matter of weeks. The main battle lasted from April 25 until the end of August. During those four months no more progress than a mile or two was made from the landing zone, which was continually within range of Turkish mortars and artillery. From some positions there was machine gun fire as well. The Turkish forces had no aircraft and poor artillery, however they were well prepared. ...read more.

The Gallipoli Campaign ended in a costly failure. Allied troops had completely withdrawn by January 1916 having suffered over 30,000 casualties. The Turks had held the line but at a terrible cost with up to 200,000 casualties. The Royal Navy's inability to force the Dardanelles Straits with its battleships was clearly one of the causes of the expeditions failure. Also, the soldiers were not trained on how to land on beaches and were simply knocked down and killed before they reached land. The allies were slow to react having landed and the Turks had been given time to rearm and reinforce. The trenches were in terrible condition and soldiers suffered from disease, water shortages and food shortages. A new commander was put in charge of the campaign that decided to continue and brought an end to the campaign. ...read more.