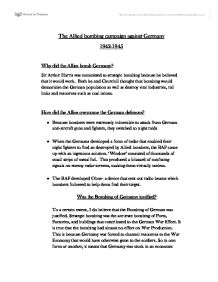 The Allied bombing campaign against Germany

The Allied bombing campaign against Germany 1942-1945 Why did the Allies bomb Germany? Sir Arthur Harris was committed to strategic bombing because he believed that it would work. Both he and Churchill thought that bombing would demoralise the German population as well as destroy vital industries, rail links and resources such as coal mines. How did the Allies overcome the German defences? * Because bombers were extremely vulnerable to attack from German anti-aircraft guns and fighters, they switched to night raids * When the Germans developed a form of radar that enabled their night fighters to find an destroyed by Allied bombers, the RAF came up with an ingenious solution. ...read more.

* The RAF developed Oboe- a device that sent out radio beams which bombers followed to help them find their target. Was the Bombing of Germany justified? To a certain extent, I do believe that the Bombing of German was justified. Strategic bombing was the accurate bombing of Ports, Factories, and buildings that contributed to the German War Effort. It is true that the bombing had almost no effect on War Production. ...read more.

The raid killed 40,000 people. Moreover, Dresden was not particularly an important military or industrial target. Furthermore, Britain's aim was to destroy the morale of the German people but it only strengthened their support for the war. In conclusion to this essay, even though there was some wrong-doing in my perspective, I do think the Bombing of Germany was justified. It shortened the war and so saved many lives of civilians and soldiers and most of all it halted the German production that prevented the German's from continuing their offensive at maximum potential. ...read more.