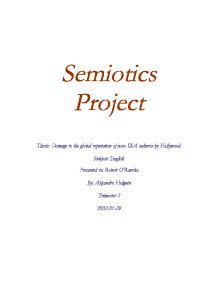 The basic idea of my project is to demonstrate that Colombia's global reputation, drugs and terrorism, has been decaying during the past decade (1990-2000).

Semiotics Project Thesis: Damage to the global reputation of non-USA cultures by Hollywood. Subject: English Presented to: Robert O'Rourke By: Alejandro Holguin Trimester 2 2002-01-29 RATIONALE The basic idea of my project is to demonstrate that Colombia's global reputation, drugs and terrorism, has been decaying during the past decade (1990-2000). My research will be based on getting enough information including specific facts and quotes, which will show how and why is the U.S government and its film industry is responsible for all the damage done to our country's worldwide image. Within the following report, I intend to prove through films, newspaper reports, magazines, and Internet articles, that the U.S�s interest in Colombia is extremely harmful for our image. And that in a non-direct way they are trying to make the world believe that what Colombia needs is military intervention. What I want is to demonstrate the permanent harm that the U.S government is causing to our country. Through out my report Ill show direct facts that prove that Colombia is not the world's most violent country. Even though we produce high amounts of different drugs. There are many drug cartels around Latin America that produce much higher amounts of drugs than the Colombian ones. Colombia has to deal with the worst part of the problem because our drugs are proved to contain the best quality. This is not something to be proud of, but is it really true? Since the start to the end of my project you will be able to see when did this problem begin, with who did it begin and why. You can also see different statements given by experts in the problem in which they give their opinion complemented by certain facts. The significance of this investigation is to express what I think of this problem and to make the readers understand that even though they might not see the content of the films as harmful for Colombia, it is and it should be stopped quickly. ...read more.

What the USA regrets even more is that they were the ones who trained the Arabs. They were the ones who taught the Arabs everything they know. The purpose of this was to help the Arabs get rid of the Russians, who had invaded their territory. At the time the Arabs became very powerful and got rid of the Russians. But what the U.S�s government never imagined was that the Arabs would use all that power against them later on. This problem has been a lot more recent than the one of the Italians. But has also been a lot worse. The U.S government never acted directly upon this problem. Just up until now that they felt directly threatened with the "World Trade Center" attack. I think that the war against the Arabs had been planned a long time ago. It just hadn't been made public. I would also add to my thoughts; that the USA was waiting for an opportunity like this one, to make the war official. What I can be sure of is that they never imagined that to get the opportunity to do so, would implicate such a disaster. This war against the Arabs has now become social, political and cultural. What makes the situation even worse is the fact that the world will never know what percentage of responsibility does the USA have in all this conflict. It is practically impossible to hear that the USA are the bad guys or at least that they're doing something wrong. The reason is very simple. The U.S news channel bought the only channel able to transmit news about the true situation of the Arabs just before the official war began. A reason for doing this could have been to prevent the release of news that could affect the USA�s image. This was a very intelligent thing to do if we consider the fact that beneath all these lies exists an unknown truth, which could diminish the U.S�s reputation. ...read more.

The only intelligent thing about this is that they do it to countries that can affect them directly in a future. ANALYSIS I am a very big fan of this type of investigations. When I get the opportunity to choose a topic at my discretion I usually tend to choose something, which really is of my own interest. This will certainly increase the quality of my project. I look towards these projects as the perfect opportunity to investigate about something I rather not investigate in my free time (for many reasons). I was interested in this specific topic because I have had the chance of being involved in situations were I'm in doubt of what is true and what is not. My doubt was; why does the U.S government want to damage our reputation so badly. Also if this had something to do with them being the worlds greatest drug consumers. Since the start of my project I reflected images like; terrorism, drugs, violence, corruption, politics, film industries, etc. All these added up make one simple picture: Negativism inside within a country, unfortunately; Colombia. During the report I was permanently using adjectives, quotes, examples, and a numerous amount of nouns. I used several different but not many verbs. Within the adverbs and conjunctions I do accept that there has been a failure with the usage of these. My tone is more of a narrator type of tone, which in some parts does change and becomes a bit aggressive. I do know that my change in tone might not be very comfortable for the reader. The mood instead was amore positive. I was being very descriptive and trying to be very persuasive. I might have not achieved completely what I was trying to achieve when I wrote my rationale. Because I do feel that in some parts I don't answer nor prove what I was supposed to. It seem that there are many parts were I go on and on giving examples and talking about things related to my investigation. I would finally classify my project as 70% effective. ...read more.