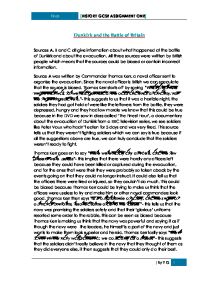 The Battle Of Dunkirk

Sources A, B and C all give information about what happened at the battle of Dunkirk and about the evacuation. All three sources were written by British people which means that the sources could be biased or contain incorrect information.

Source A was written by Commander Thomas Kerr, a naval officer sent to organise the evacuation. Since the naval officer is British we can speculate that the source is biased. Thomas Kerr starts off by saying “What a terrible night that was, for we had got hold of the odds and ends of an army, not the fighting soldiers.”- this suggests to us that it was a horrible night, the soldiers they had got hold of were like the leftovers from the battle, they were depressed, hungry and they had low morale we know that this could be true because in the DVD we saw in class called ‘The Finest Hour’, a documentary about the evacuation of Dunkirk from a BBC television series, we see soldiers like Peter Vaux who hadn’t eaten for 5 days and was very tired. This source tells us that they weren’t fighting soldiers which we can say is true because if all the suggestions above are true, we can truly conclude that the soldiers weren’t ready to fight.

Thomas Kerr goes on to say “There were hardly any officers, and the few present were useless”- this implies that there were hardly any officers left because they could have been killed or captured during the evacuation, and for the ones that were their they were probably so taken aback by the events going on that they could no longer instruct. It could also tell us that the officers there were tired or injured, so they couldn’t do much. This could be biased because Thomas Kerr could be trying to make us think that the officers were useless to try and make him or other naval commanders look good. Thomas Kerr then says “but our promise of safety, and the sight of our naval uniforms, resorted some order to the rabble“- this tells us that the navy was promising the soldiers safety and that their ‘glorious’ uniforms resorted some order to the rabble, this can be seen as biased because Thomas Kerr is making us think that the navy was powerful and saying it as if though the navy were   the leaders, he himself is a part of the navy and just wants to make them look superior and heroic. Thomas Kerr lastly says “Their faith in the navy was pathetic; we could only do our best.”- this suggests that the soldiers didn’t really believe in the navy that they thought of them as they did everyone else, it then suggests that they could only do their best.

Overall, this source gives us a lot of information on what happened in the evacuation of Dunkirk although quite a bit of the information is biased, in favour of the British and the navy there is some truth in the source.