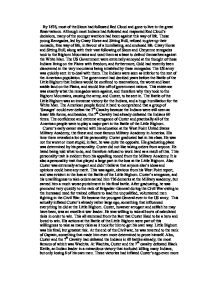 The Battle of the Little Bighorn.

By 1876, most of the Sioux had followed Red Cloud and gone to live in the great Reservations. Although most Indians had followed and respected Red Cloud's decisions, many of the younger warriors had been against this way of life. These young Renegades, led by Crazy Horse and Sitting Bull, refused to give up their nomadic, free way of life, in favour of a humiliating, and enclosed life. Crazy Horse and Sitting Bull, along with their vast following of Sioux and Cheyenne renegades took to the Bighorn Mountains and used them as a base to defend themselves against the White Man. The US Government were extremely annoyed at the thought of these Indians living on the Plains with freedom, and furthermore, Gold had recently been discovered in the very mountains being inhabited by these renegades. The US army was quickly sent in to deal with them. The Indians were seen as inferior to the rest of the American population. The government had decided years before the Battle of the Little Bighorn that Indians would be confined to reservations, the worst and least arable land on the Plains, and would live off of government rations. This existence was exactly what the renegades were against, and therefore why they took to the Bighorn Mountains, causing the army, and Custer, to be sent in. The Battle of the Little Bighorn was an immense victory for the Indians, and a huge humiliation for the White Man. The American people found it hard to comprehend that a group of 'Savages' could ever defeat the 7th Cavalry because the Indians were still seen as lesser life forms, and besides, the 7th Cavalry had already defeated the Indians 60 times. ...read more.

The first column was to be led by General Terry, with assistance from Colonel George Custer and the 7th Cavalry. The 2nd column was mainly the infantry and foot soldiers led by Colonel Gibbon, and General Crook led the 3rd column. Scouts, Indians who had changed sides are were now spying for the US army to avoid the reservations or death, managed to locate the Indian camp in the valley of the Little Bighorn in the Bighorn mountains. Sheridan's plan involved each army column taking different routes to trap the Indians in the valley. General Crook was to lead his column of 1049 cavalry and infantry northwards from Fort Fetterman and around to the East of the Indian Camp. Colonel Gibbon's column was to march southwards and attack the North of the camp. The last column was split in two, so that General Terry remained back with half of the men to act as reinforcements, whilst Custer would take the 7th cavalry around the Wolf Mountains to attack the camp from the south. The three columns would them trap the Indians between them. However, there were a number of unfortunate events that occurred before June 26th 1876, the set date for the battle. General Crook's column rested on the Rosebud Creek for a coffee break. As they played a game of Whist, Crazy Horse ambushed them, leading a full frontal attack with around 1500 warriors. Crook's men were completely taken by surprise. Unfortunately, Crook did not manage to win the battle of the Rosebud as he soon lost 28 men with 63 wounded even after firing 25,000 rounds of ammunition. ...read more.

Custer's personality was vain, arrogant, proud and complacent, as well as determined, strong-willed, brave and courageous. He was a great war leader because of his determination, skill and willingness to take risks, but other areas of his personality conflicted with this, especially when his vanity and pride caused him to decide to disobey orders and cause this tragedy. I believe that Custer's personality was the major downfall of the Battle of the Little Bighorn. The events that followed Custer's decision to try and win the battle alone are no so important because the fact still remains that his arrogance, pride and vanity led him to disobey orders and try and win alone. This was the decision that ruined the Battle. Given the amount of Indians in the valley, this would have been virtually impossible to win in the way Custer planned it. I think that the blame for this disaster lies on Custer's personality and character, although, his already magnified ego was unfortunately even more bloated by the fame and hints of presidency that he received from the American public. I would say, however, that it was completely Custer's fault because everyone should take responsibility for his or her own actions. The praise and fame that inflated is ego may have helped his disastrous decisions but they would not have, had Custer not been so vain and proud. Custer's personality traits unfortunately clashed horribly and overpowered each other, causing him to be rather irrational and completely arrogant. The bad points of his character overwhelmed the good and the outcome was the Battle of the Little Bighorn. ...read more.