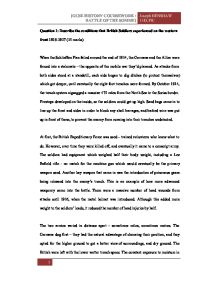 The Battle of the Somme

Question 1: Describe the conditions that British Soldiers experienced on the western front 1915-1917 (15 marks) When the Schlieffen Plan failed around the end of 1914, the Germans and the Allies were forced into a stalemate - the opposite of the mobile war they'd planned. As attacks from both sides stood at a standstill, each side began to dig ditches (to protect themselves) which got deeper, until eventually the eight foot trenches were formed. By October 1914, the trench system zigzagged a massive 475 miles from the North Sea to the Swiss border. Firesteps developed on the inside, so the soldiers could get up high. Sand bags came in to line up the front and sides in order to block any shell barrages, and barbed wire was put up in front of those, to prevent the enemy from running into their trenches undetected. At first, the British Expeditionary Force was used - trained volunteers who knew what to do. However, over time they were killed off, and eventually it came to a conscript army. The soldiers had equipment which weighed half their body weight, including a Lee Enfield rifle - no match for the machine gun which would eventually be the primary weapon used. ...read more.

Also, with the stalemate, as well as the government being blamed for the lack of munitions being provided for the military, Haig now needed to boost morale back home. So with Haig now facing pressure to launch an offensive from the British and the French, even his own commanders were now insistent that they went ahead with a "big push" very soon. Henry Rawlinson was an infantry officer of the 4th army, and he had to command the actions of the main attacks of his force. Like Haig, his belief was that the only way to get ahead was the big push. He came up with the plan to fire at the enemy trenches non-stop for seven days to wear down their morale. He felt sure that a "hurricane bombardment" would "bite and hold" the enemy, and would be more effective than a cavalry infiltration. Haig's optimism was in many ways his downfall. The intelligence officers reported that the German defence was weak, morale low, and there were few officers remaining. Haig also believed that the ammunition crisis had been solved. He said: "the nation must be taught to bear losses", and followed his plan all the way through, despite his intelligence being inaccurate. ...read more.

However, the other statistic that the British, after all this effort, had only advanced 8km is much less promising. So was Haig really a "butcher" who sent innocent men to their deaths? The risky plan certainly was all his doing; and he failed to get the hang of the modern day trench warfare he was faced with. But he cannot be blamed for his decision - everything to influence the failure wasn't his fault. The intelligence was false, the supplies were low, the ammunition and technology were nothing to do with him. My personal opinion is that Haig was not the "butcher of the Somme", but was simply taking the best option that was there at the time. In the end, the British did win the war, even at a terrible loss from this one battle. To conclude, the Somme failed because of military failures; poor supplies of resources and information. It was always going to have a major death toll - any major assault of this scale would have to. Not all objectives were achieved, but the battle was a major blow for the enemy, and in the end, probably secured an allied victory. ?? ?? ?? ?? [GCSE HISTORY COURSEWORK : BATTLE OF THE SOMME] Joseph HENSHAW 11D, PIC 1 ...read more.