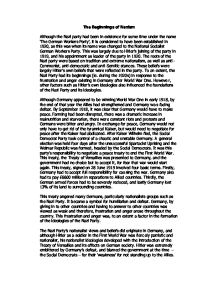 The Beginnings of Nazism.

The Beginnings of Nazism Although the Nazi party had been in existence for some time under the name 'The German Workers Party', it is considered to have been established in 1920, as this was when its name was changed to the National Socialist German Workers Party. This was largely due to Hitler's joining of the party in 1919, and his appointment as leader of the party in 1920. The roots of the Nazi party were based on tradition and extreme nationalism, as well as anti-Communist, anti-democratic and anti-Semitic stances. These beliefs were largely Hitler's own beliefs that were reflected in the party. To an extent, the Nazi Party had its beginnings (ie. during the 1920s) in response to the frustration and anger existing in Germany after World War One. However, other factors such as Hitler's own ideologies also influenced the foundations of the Nazi Party and its ideologies. Although Germany appeared to be winning World War One in early 1918, by the end of that year the Allies had strengthened and Germany was facing defeat. By September 1918, it was clear that Germany would have to make peace. Farming had been disrupted, there was a dramatic increase in malnutrition and starvation, there were constant riots and protests and Germans were bitter and angry. ...read more.

Whilst in jail, he wrote the book 'Mein Kampf', or 'My Struggle'. In this book, Hitler outlined his nationalist ideologies, stating clearly that Germany should 'obtain land by military conquest' and that Germany must remain strong. As Hitler's nationalist beliefs were entrenched and developed with the writing of 'Mein Kampf', so too were the nationalist ideals of the Nazi Party. The nationalist ideologies of the Nazi Party did have their beginnings in response to the frustration and anger that existed in Germany after its defeat in World War One, and with the signing of the Treaty of Versailles. Another of the Nazi Party's chief ideologies was its anti-Semitic stance. This anti-Semitism was, rather than a product of frustration and anger after World War One, a reflection of Hitler's ideals and beliefs that he brought with him from Austria-Hungary. In Austria-Hungary, and particularly Vienna, Hitler was exposed to the anti-Semitic views of Lanz von Liebenfels, Georg von Schonerer and the All German Party. In Austria-Hungary too, Hitler adapted the swastika, a secret symbol of Guido von List. Hitler's anti-Semitic views were not directly established from the frustration and anger resulting from the loss of World War One, but rather developed gradually during Hitler's upbringing - ideologies which were reflected in the beliefs of the Nazi Party. ...read more.

However, other main platforms of the party such as anti-Semitism, anti-Communism and anti-democracy were established by influential individuals - namely Hitler and Rosenberg within the Nazi Party prior to the end of World War One, and in other countries such as Austria-Hungary and Russia. Therefore, the claim that the Nazi Party had its beginnings in response to the frustration and anger existing in Germany after World War One is true to a slight extent, however not entirely accurate. To a large extent, the beliefs and ideologies of the Nazi Party were formed during Hitler's upbringing in Austria-Hungary - beliefs and values that were adopted by the Nazi Party, and to a smaller extent in Russia during the Russian Revolution - both outside of and prior to German frustration and anger after World War One. Although some of these beliefs such as anti-democracy may have been reinforced after World War One in Germany, the Nazi Party had its ideological beginnings elsewhere. 5. What tactics did the Nazi Party use to gain support in the economy? The Nazis used scare tactics in general in order to gain support in the economy, in the workplace and in government in general. The main point of focus of the Nazi scare tactics was the SA, who were effectively the nazi Party's 'private army'. ...read more.