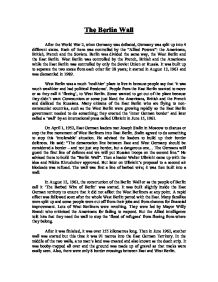 A rapid effect was followed soon after the whole West Berlin parted with the East. Many families were split up and some people were cut off from their jobs and from chances for financial improvement. Lots of West Berliners were revolting. They were led by Mayor Willy Brandt who criticised the Americans for failing to respond. But the Allied intelligence told him that they need the wall to stop the 'flood of refugees' from fleeing from where they belong. After it was finished, it was over 155 kilometres long. Then in June 1962, another wall was started but this time it was 91 metres into the East German Territory. In the middle of the two walls, a no man's land was created and also known as the death strip. It was booby-trapped all over and the ground was made up of gravel so that tracks were easily seen. ...read more.

He started doing this because millions of people are now gathering in Alexanderplatz, East Berlin and are protesting. Then on November 10, Gunter Schabowski, an East German Minister of Prpaganda, passed a note shortly before a press conference (November 9, 1989). It said that East Berliners should be able to travel freely between the borders. He also said that these changes would take the following day so that there would be time to inform the guards. But he was on live East German TV, so as soon as the East Berliners heard about this, they all flooded the nearest checkpoints. The East German authorities didn't advise the guards to do anything, and they were outnumbered so they just gave up and opened to gates and let the East Berliners through. They were greeted by the West Berliners with a celebratory atmosphere. So therefore, November 9 was the fall of the Berlin Wall. Few weeks later, people started bringing sledgehammers to the wall in order to chip some bits of the wall to keep for souvenirs. These people were nicknamed 'Mauerspechte' (wall woodpeckers). ...read more.