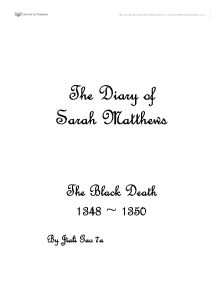 The Diary of Sarah Matthews The Black Death 1348 ~ 1350 By Jiali Gao 7a 4th August 1348 Dear diary, This morning was no different from any other morning at the nunnery: simply prayers, meals and work. All was normal. Like the rest of this summer, it was abnormally wet. In fact, it all seemed a bit too normal. It gave me this strange feeling, somewhere deep inside, that something was wrong. A strange sense of fear would not leave my mind. Everyone seemed unusually quiet, today. At first, I thought they were hiding something from me, but it wasn't until our meeting in the chapter house, that I found out what it was... We'd all been given our jobs for the day and were about leave, when Sister Maria stopped us. That's when it came. She told us that someone from Bristol had caught some deathly plague, named the Black Death, two weeks ago and now nearly the whole city had it. Around a hundred people have already died. From there, it had already spread to all the nearby villages. Although it was still quite far from us, in outer London, we were to be careful and aware of its presence. Teresa told me that it kills nearly everyone who catches it, and as soon as one person from a village has it, everyone in the village is in danger. ...read more.

Word of mouth has it that, there's a doctor in France, who's saved many people with the plague. This really raised my hopes. Unfortunately, Sister Maria said that we'd raised nowhere near enough money, to go all the way to France; we'd have to go into London. I begged her to let me come with her, to my surprise, she agreed instantly. It must be because she knows how much I loved Anne. However, I afraid the result wasn't as we'd desired at all. As we walked through the streets, sick people with the same rash and buboes as Anne were a common sight. There were almost as many of them, as there was filth (and there's certainly a lot of that)! Swage, dead bodies and grease were littered everywhere. We had to go to about ten hospitals, before we could find one open! Apparently, they'd all closed, as the doctors were scared of being infected, how irresponsible! And when we did find a hospital, it was absolutely crowded with people; every person had the plague. It made me feel a bit awkward to be odd one out. We waited for about two hours to see the doctor, who seemed worn out and scared of the disease as well. He said that most people died within 3 days, so Anne was pretty lucky to still be alive. ...read more.

Father's even had to provide food, drink and other benefits. He was a bit upset that he wasn't making as much money as before, but I'm just happy that he's safe. Mother said that she went to our nunnery, but there was nobody there. The buildings were beginning collapse and wild plants grew everywhere. She thought I was dead, until I wrote last week. No one else that I know of has caught the plague in the last 2 weeks. Could God really have spared me? Perhaps it has finally stopped ...can't be too sure though! Epilogue It is estimated that around one third of the British population died of the Black Death. The exact date it arrived in England is not known, though historians think it was sometime during the summer months of 1348. After 1350, it struck England another six times by the end of the century. Scientists later discovered that it was bubonic and pneumonic plague, though they are not entirely sure of this. Bubonic plague is caused by fleas that have bit infected black rats, biting humans. This causes the disease to be injected into humans. Pneumonic plague is caused by people breathing in infected air. Both are bacteria born diseases. Henry Knighton wrote, "In the parish of Holy Cross more than 400 died. After the pestilence many buildings fell into ruins in every borough and village, for lack of people; many places became deserted, all having died who lived there." 10 ...read more.