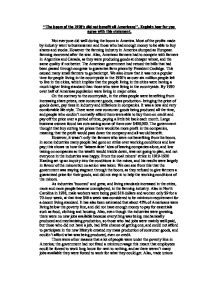 ''The boom of the 1920's did not benefit all Americans''. Explain how far you agree with this statement.

''The boom of the 1920's did not benefit all Americans''. Explain how far you agree with this statement. Not everyone did well during the boom in America. Most of the profits made by industry went to businessmen and those who had enough money to be able to buy shares and stocks. However the farming industry in America slumped as European farming recovered after the war. Also, American farmers had to compete with farmers in Argentina and Canada, as they were producing goods at cheaper wheat, and the same quality if not better. The American government had vetoed the bills that had been passed through congress to guarantee farm prices by President Coolidge. This caused many small farmers to go bankrupt. We also know that it was not a popular time for people living in the countryside in the 1920's as over six million people left to live in the cities, which implies that the people living in the cities were having a much higher living standard than those who were living in the countryside. By 1930 over half of Americas population were living in major cities. On the contrary to the countryside, in the cities people were benefiting from increasing share prices, new consumer goods, mass production- bringing the price of goods down, pay rises in industry and inflations in companies. ...read more.

It appears that the government did little to help the workers and a lot to help large business owners. In nearly every major strike action in the 1920's the government supported the management against the workers. The Supreme Court declared that two state laws banning child labour were 'unconstitutional' and also banned laws setting a minimum wage for women workers. Many people lost faith in the unions and left when a strike action failed to lead to better working conditions and pay. By 1929 the number of union members had dropped from 5.1 million in 1920 to 3.6 million. A lot of the Americans, who found themselves below the poverty line, were white Americans, however there was an even greater percentage of black Americans or Hispanic people and other members of the U.S.A.'s large immigrant communities. This was mainly because a lot of them had jobs in the 'old industry'. The old industry was mainly manual tasks, many of which were being replaced by machines, at a cheaper price, so they lost their jobs. Black Americans generally had the least skilled jobs, so worked on farms, and as the farm industry was doing so badly from the competition and the demand from Europe falling short when its farming industry recovered after the war, found themselves loosing there jobs. ...read more.

It is quite a general statement which is why I feel inclined to agree with it, as it is true that many American's did benefit from the new industries, and were able to live a much higher standard of live, but this was only apparent in the major cities, with large industries and businesses, where people could afford to buy shares and stocks, and create a large demand for consumer goods, which lead to a rise in company share values, and the tax cuts meant there was more wealth in the company so some people, for example Henry Ford's workers, found their wages increase. But a large percentage of Americans did not benefit from the boom for examples farmers ended up going bankrupt, and low skilled jobs were replaced by more efficient machines, so thousand of white, black and immigrant Americans lost theirs jobs. Many people were forced to live below the poverty line because the government did not aid those who needed it with security and funding, and as a result a lot of people became desperate, and forced to work in a low paid job under extremely bad conditions. So I feel that for the Americans who could afford to keep up with the industry, the boom benefited them, but those with a lesser social class, and lower paid/ less skilled jobs in the older industries, the boom bankrupted them and sent a lot of people into poverty. ...read more.