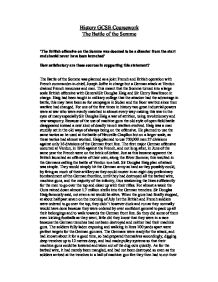 'The British offensive on the Sommewas doomed to be a disaster from the start and should never have been launched' How satisfactory are these sources in supporting this statement?

History GCSE Coursework The Battle of the Somme 'The British offensive on the Somme was doomed to be a disaster from the start and should never have been launched' How satisfactory are these sources in supporting this statement? The Battle of the Somme was planned as a joint French and British operation with French commander-in-chief, Joseph Joffre in charge but a German attack at Verdun drained French resources and men. This meant that the Somme turned into a large scale British offensive with General Sir Douglas Haig and Sir Henry Rawlinson in charge. Haig had been taught in military college that the attacker had the advantage in battle, this may have been so for campaigns in Sudan and the Boer war but since then warfare had changed. For one of the first times in history two great industrial powers were at war who were evenly matched in almost every way making this war in the eyes of many especially Sir Douglas Haig a war of attrition, using revolutionary and new weaponry. Because of the use of machine guns the old style of open field battle disappeared instead a new kind of deadly trench warfare evolved. Haig was a man sturdily set in the old ways of always being on the offensive. He planned to use the same tactics as he used at the battle of Neuvelle Chapllon but on a larger scale, as these tactics had almost worked. Haig planned to use 750,000 men 27 divisions against only 16 divisions of the German front line. The first major German offensive occurred at Verdun, in 1916 against the French, and not long after, in June of the same year the French were on the brink of defeat. Just as this became apparent the British launched an offensive of their own, along the River Somme; this resulted in the Germans calling the battle of Verdun to a halt. ...read more.

what Haig says in the first sentence of his report because even a German General in his memoirs is writing that the Germans are worn down and exhausted. So at least here Haig is right. Source D (Extract from a letter written by Lloyd-George to Haig on 21st September 1916 after his visit to the Somme) Haig and Lloyd George disliked each other. But here Lloyd George praises Haig for the one thing he hates the most, the way in which Haig conducts battle, Lloyd George in his memoirs even condemned Haig as incompetent, a person who medalled with people's lives. The reason for this praise is at the time this letter was written Lloyd George was running to be prime-Minister as Asquith had resigned after his son died on the Somme. But Lloyd George being a Welshman from humble backgrounds was at a disadvantage and so needed allies like Haig who were in the Establishment and had friends in high places who could sway the vote for Lloyd George in his attempt at replacing Asquith and becoming Prime-Minister. Lloyd George writes this letter after his visit to the Somme but it would have been most likely that Lloyd George would have only seen a very small proportion of the entire 18 mile. Also Lloyd George would have also only seen select areas were the battle was going well. Really this source is quite unreliable because we don't really know if Lloyd George is really praising Haig or just manipulating him in sights of his own political ambitions. Source E Source E- Extract from My War Memoirs by the German General Ludendorff, published in 1919 this piece is evidence from after the event, secondary evidence. Therefore it doesn't carry so much judgement with it but Ludendorff was a key member of the German army. This piece is a justification of his part in the German war effort and tries to justify his part in the defeat of Germany. ...read more.