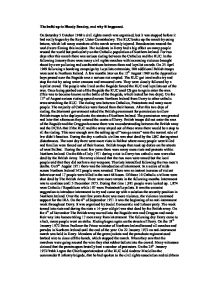 The build up to Bloody Sunday, and why it happened.

The build up to Bloody Sunday, and why it happened. On Saturday 5 October 1968 a civil rights march was organised, but it was stopped before it had really begun by the Royal Ulster Constabulary. The RUC broke up the march by using batons, which left many members of the march severely injured. Broadcasters around the world were filming this incident. The incidents in Derry had a big effect on many people around the world but particularly on the Catholic population of Northern Ireland. For two days after this march there was serious rioting between the Catholics and the RUC. In the following January there were many civil rights marches with increasing violence brought about by over policeing and confrontations between them and loyalist crowds. On 25 April 1969 following a bombing campaign by Loyalists extremists, 500 additional British troops were sent to Northern Ireland. A few months later on the 12th August 1969 as the Apprentice boys passed near the Bogside area a serious riot erupted. The RUC got involved to try and stop the riot by using water cannons and armoured cars. They were closely followed by a loyalist crowd. The people who lived on the Bogside forced the RUC and loyalists out of the area. Once being pushed out of the Bogside the RUC used CS gas to again enter the area. ...read more.

At 3.25pm the march passed the Bogside Inn.At approximately 3:55 pm, away from the riot and also out of sight of the meeting, soldiers in a derelict building opened fire and injured Damien Donaghy and John Johnston.. Also around this time (about 3.55 pm) as the riot in William Street was breaking up, Paratroopers requested permission to begin an arrest operation. By about 4.05 pm most people had moved to 'Free Derry Corner' to attend the meeting.At 4.07 pm an order was given for a 'sub unit' of the 1st Battalion Parachute Regiment to move into William Street to begin an arrest operation directed at any remaining rioters. The order authorising the arrest operation specifically stated that the soldiers were "not to conduct running battle down Rossville Street". The soldiers of Support Company were under the command of Ted Loden, then a Major in the Parachute Regiment and were the only soldiers to fire at the crowd from the street level.At approximately 4.10pm soldiers of the Support Company of the 1st Battalion Parachute Regiment began to open fire on the marchers in the Rossville Street area. By about 4.40pm the shooting ended with 13 people dead and a further 13 injured from gunshots.The official army position was that the Paratroopers had reacted to the threat of gunmen and nail-bombs from suspected IRA members. ...read more.

The Outcome of bloody Sunday. * National and international reaction to Bloody Sunday, which included worldwide protests led to a clash between the Stormont government and Westminster. * Brian Faulkner, a hardline Unionist who had become the Prime Minister of N.I. in March 1971, wanted even stronger security measures. * The British PM Edward Heath demanded complete British control of security, law and order and the judiciary. * Introduction of Direct Rule. The Stormont government was suspended on 24thMarch 1972 and responsibility for the running of NI now rested with Westminster. * Increase in violence. In the 3 years prior to Bloody Sunday 210 were killed in troubles. In the 11 months after Bloody Sunday 445 people lost there lives. * Widgery Inquiry launched. The English Lord Chief Justice, Lord Widgery, was appointed to investigate the events of Bloody Sunday * Before announcing the inquiry the English PM, Edward Heath, met Lord Widgery and told him it must be quick and that a military and propaganda war was being fought in NI. The Nationalist community was unaware of this meeting and unaware of what Lord Widgery decided at this meeting. * Lord Widgery decided the inquiry should : * -Examine if the army shot indiscriminately at the crowd or only at certain identified targets, not if the people shot were unarmed. * Look only at the events of a limited time span on the day itself, from the first shot to the last. * Take as little time as possible. ...read more.