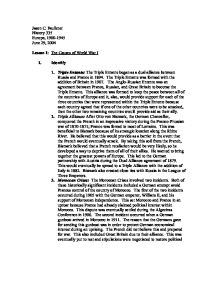 The Causes of World War I.

Jason C. Faulkner History 335 Europe, 1900-1945 June 29, 2004 Lesson I: The Causes of World War I I. Identify 1. Triple Entante: The Triple Entante began as a dual alliance between Russia and France in 1894. The Triple Entante was formed with the addition of Britain in 1907. The Anglo-Russian Entente was an agreement between France, Russian, and Great Britain to become the Triple Entante. This alliance was formed to keep the peace between all of the countries of Europe and it, also, would provide support for each of the three countries that were represented within the Triple Entente because each country agreed that if one of the other countries were to be attacked, then the other two remaining countries would provide aid as their ally. 2. Triple Alliance: After Otto von Bismark, the German Chancellor, conquered the French in an impressive victory during the Franco-Prussian war of 1870-1871; France was forced to most of Lorraine. This was beneficial to Bismark because of its strategic location along the Rhine River. He believed that this would provide as a barrier in the event that the French would eventually attack. By taking this soil from the French, Bismark believed that a French retaliation would be very likely, so he developed a way to deprive them of all of their allies. He wanted to bring together the greatest powers of Europe. ...read more.

II. Discuss in detail the crisis that caused the outbreak of hostilities in 1914. The outbreak in hostilities that occurred in 1914, in Europe can be attributed to many underlying forces. The continent of Europe became divided into two acting forces, which attributed to the friction that the landscape of Europe faced in the early twentieth century. The two acting forces that divided this country were the Triple Alliance and the Triple Entante. The Triple Alliance began as a dual alliance with Germany and Austria during 1879. The German Chancellor, Otto von Bismark, spearheaded this idea. He believed that if he could unit the superpowers of Europe, he would become very superior if he were ever to have to confront the notion of war. He spread this idea further when he added Italy into this Alliance, thus creating the Triple Alliance. The main idea of this Triple Alliance was that if one of the three countries within this alliance were ever attacked the other two would support them with aid. This aid could be military aid or moral backing. This became a major factor into the beginning of the hostilities in 1914 because a big portion of Europe had united. In fear of this Russia and France united as allies in 1894 and later Britain was added to create the Triple Entante in 1907. ...read more.

The failure of leadership became important to the beginnings of the war because it seemed as though the idea of war was never actually looked upon as being avoided especially within the German government. Otto von Bismark displayed much enthusiasm with this war and tried to push this war into beginning. Bismark instituted the idea of the Triple Alliance, which was played an important role in starting this war. Another event, which portrayed a lack of leadership, was when Austria gave Serbia an ultimatum after the assassination of Ferdinand. The demands which were issued to Serbia were preposterous Serbia could never concede to the demands which were issued to them. The Austrian government understood this thus pushing them into war. This leadership, or lack there of, was an important factor of the war. The newspaper press was also a major factor in the beginnings of war. The newspapers throughout Europe had a huge amount of readership and influence many people across the landscape of Europe. With the writings of many of the events in Europe during this time came more public response to the ideas of the war occurring. This was especially evident during the incident in Sarajevo. Newspapers caused much public unrest during the assassination of Ferdinand and thus putting people into a rage and causing more public approval for the war. 1 Eugene N. Anderson. The First Moroccan Crisis 1904-1906. (The University of Chicago Press) 1930. 2 Gilbert, Martin. The First World War. (New York: Henry Holt and Company) 1994. ...read more.