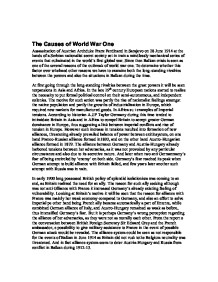 The Causes of World War One

The Causes of World War One Assassination of Austrian Archduke Franz Ferdinand in Sarajevo on 28 June 1914 at the hands of a Serbian nationalist secret society set in train a mindlessly mechanical series of events that culminated in the world's first global war. Since then Balkan crisis is seen as one of the several reasons of the outbreak of world war one. To determine whether this factor over whelmed other reasons we have to examine both the long-standing rivalries between the powers and also the situations in Balkan during the time. At first going through the long-standing rivalries between the great powers it will be seen texpansions in Asia and Africa. In the late 19th century European nations started to realize the necessity to put formal political control on their semi-autonomous, and independent colonies. The motive for such action was partly the rise of nationalist feelings amongst the native population and partly the growths of industrialization in Europe, which required new markets for manufactured goods. ...read more.

The alliance system could be seen as not responsible for the events of Balkan in June 1914 as Britain did not rush tothe Belgium neutrality was threatened. And in fact alliance system seem to deter Austria-Hungary and Russia from conflict in Balkan during 1912-13. Some historians saw Germany's long-term motive for world domination was one of the main factors for the outbreak of war. Germany's adop industrial boom, and increased popular opinion for imperial expansion. Industrialization also necessitated the search of new markets for manufactured goods and source of raw materials leading to colonial expansion in Africa. According to the interpretation of Historian Fischer, 'Weltpolitik' was a three-part plan and a response of post industrialization time. The three-part plan included; creation of German empire in central Africa, creation of economic control over central Europe and build ustorians also highlighted German popular desire for territorial possessions in post unific situation. Historians like Berghahn and Geiss argue it was a mean to divert attention from rise of socialism at home. ...read more.

Also Britain's ambiguous position regarding taking action against Germany in the event of an attack on France actually helped Germany to take action. Possibly if Britain had made their position clear Germany would have put effort on Austria-Hungary not to annex Serbia and she would not go to implement Schliffen plan. Analyzing Germany's motive for supporting Austria-Hungary two reasons could be revealed, firstly the fear of losing her last ally, and secondly she might have felt the time was now opportune to goFrance's response against Germany couldith Germany, but as result of Germany's rejection Britain had to take the action, and could be argued for her alliance system was not the main factor. Also Italy although being allied to both Germany and Austria-Hungary, was able to avoid entering the fthe long-standing rivalries and Balkan situation it could be concluded by saying that althustro-Hungary during the war was obviously a result of long standing rivalries. But we could also argue that if the Balkan crisis would have been solved the final Serbian problem would not have emerged, and at least more time could be gained in order to settle the long-standing disputes between great powers. 0061402555873 ...read more.