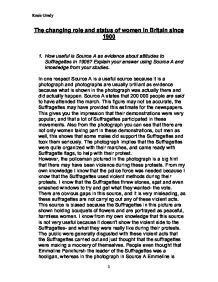 The changing role and status of women in Britain since 1900

The changing role and status of women in Britain since 1900 1. How useful is Source A as evidence about attitudes to Suffragettes in 1908? Explain your answer using Source A and knowledge from your studies. In one respect Source A is a useful source because it is a photograph and photographs are usually brilliant as evidence because what is shown in the photograph was actually there and did actually happen. Source A states that 200 000 people are said to have attended the march. This figure may not be accurate, the Suffragettes may have provided this estimate for the newspapers. This gives you the impression that their demonstrations were very popular, and that a lot of Suffragettes participated in these movements. Also from the photograph you can see that there are not only women taking part in these demonstrations, but men as well, this shows that some males did support the Suffragettes and took them seriously. The photograph implies that the Suffragettes were quite organized with their marches, and came ready with Suffragette flags, to help with their protest. However, the policeman pictured in the photograph is a big hint that there may have been violence during these protests. From my own knowledge I know that the police force was needed because I know that the Suffragettes used violent methods during their protests. I know that the Suffragettes threw stones, spat and even smashed windows to try and get what they wanted- the vote. There are obvious gaps in this source, and it is very misleading, as these suffragettes are not carrying out any of these violent acts. This source is biased because the Suffragettes in this picture are shown holding bouquets of flowers and are portrayed as peaceful, harmless women. I know from my own knowledge that this source is not very useful because it doesn't show the violent side to the Suffragettes- and what they were really like during their protests. ...read more.

In 1918 the government gave some concessions to women by allowing a partial franchise. They gave the vote only to women above the age of thirty who owned their own homes or were married to a man who owned the marital home, graduates of British universities and women who were qualified but not graduates. This was called the 'Representation of the People Act' and became law in February 1918. This law obviously resulted in a minority of British women being given the right to vote, thus resulting in far more men being allowed to vote than women, yet at the same time appeasing those groups like the Suffragette movement. Thousands of men who had volunteered to fight for their country had accidentally lost the right to vote. This was potentially embarrassing to the government, so plans were made to give them back their vote: and to reward women for their war work by giving them their limited measure of women's suffrage, as I mentioned above. This could have been another reason as to why women gained the vote because of the First World War. Once the war had ended the jobs that the women had been doing had to be passed back over to the men. Many women were disappointed at this as they were losing their independence that they had become so used to. It may have been that the government gave the women the vote in compensation for losing their war time jobs. The war effort carried out by the women may have been what made the government decide to give them the vote. If it was the work carried out by the women during the war, then you can see that they did it unknowingly. The women of Britain carried out the work during the war because it was their duty to help. Probably without realizing it the women proved to the government that they were capable, and hard working, when given the chance to show it. ...read more.

Perhaps the government just decided that the vote for women was the next logical step. At that time industry was growing, and more and more jobs for women were becoming available. For example more department stores were being opened therefore meaning that more female sales assistants were needed, also telephones were becoming more widely used, meaning call centres were being opened. Women went into more jobs like secretaries in offices. Jobs like these were seen as women's jobs. Maybe the government saw that women were becoming more independent, and it was time to give them the vote. This is a picture showing a woman working as a secretary. This shows just one of the alternative jobs that women were starting to go into. This may have been what led to the government giving women the vote. In spite of many women gaining new found employment there was still much hardship, as women's pay, and conditions of service did not equal men's. Although the Suffragette movement campaigned for votes for women it was clear that most women wanted the vote, not in order to become political activists, but to improve their daily lives. This is explained in Source G of the coursework booklet. After studying this topic for such a long time I have weighed up my evidence and I believe that the Suffragette movement was mainly responsible for gaining the vote for women. At the end of the First World War the government was highly unpopular. Many young men had been unnecessarily killed. The electorate blamed the government for many of these deaths. There was great unrest in the country and the last thing the government needed was the Suffragettes resuming their campaign for votes for women. The government sought to regain some of its popularity amongst the electorate by giving some women suffrage, at the same time saving face by using the war effort as an excuse, rather than admitting it was the Suffragette movement, and their unpopularity that had led to the passing of the Representation of the Peoples Act in 1918. ?? ?? ?? ?? Rosie Grady 1 ...read more.