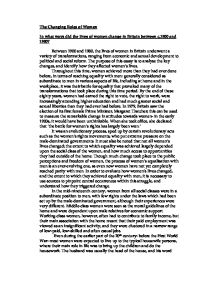 The Changing roles of women

The Changing Roles of Women In what ways did the lives of women change in Britain between c.1900 and 1980? Between 1900 and 1980, the lives of women in Britain underwent a variety of transformations, ranging from economic and sexual development to political and social reform. The purpose of this essay is to analyse the key changes, and identify how they affected women's lives. Throughout this time, women achieved more than they had ever done before, in terms of reaching equality with men: generally considered as subordinate to men in various aspects of life, including at home and in the workplace, it was their battle for equality that provoked many of the transformations that took place during this time period. By the end of these eighty years, women had earned the right to vote, the right to work, were increasingly attending higher education and had much greater social and sexual liberties than they had ever had before. In 1979, Britain saw the election of its first female Prime Minister, Margaret Thatcher; this can be used to measure the remarkable change in attitudes towards women- in the early 1900s, it would have been unthinkable. When she took office, she declared that 'the battle for women's rights has largely been won.' It was an evolutionary process, sped up by certain revolutionary acts such as the women's rights movements, who put extreme pressure on the male-dominated governments. It must also be noted that not all women's lives changed; the extent to which equality was achieved largely depended upon the social class of the women, and how much access to opportunities they had outside of the home. Though much change took place to the public perceptions and freedom of women, the process of women's equalisation with men is an ever-evolving one, as even now women have not yet completely reached parity with men. In order to evaluate how women's lives changed, and the extent to which they achieved equality with men, it is necessary to use sources to pinpoint central occurrences within this struggle, and understand how they triggered change. ...read more.

As source 66, part of the obituary for Millicent Fawcett of the NUWSS, says; 'there were three stages in the emancipation of women: the first was the long campaign of propaganda and organisation...the second was the campaign of the militants (the Suffragettes), the third was war.' The work that women's rights organisations did formed two of the three leading factors in the liberation of women. In the 1920s and 1930s, the Victorian views of women had gradually died out among the younger generations; women's clothing became simpler and less restrictive, young women no longer needed chaperones to accompany them on dates, make-up became more acceptable and it was also deemed acceptable to wear one-piece swimming costumes. Because of the money they had earned from working in WW1, they could afford a new look; source 81 tells us that 'powder and make-up became common...they smoked openly in public.' Though WW1 had changed attitudes in the way that it was now socially acceptable for women to work, once a woman was married she was expected to return to the traditional role of looking after the home and the children. Between the two World Wars, many women had paid jobs until they were married. Once married, they were expected to give up paid work; women generally did jobs such as clerks, typists, telephonists and nurses, as these jobs were considered suitable only for women. Also, a woman's pay was much less than a man's: a woman teacher earned less than a man doing the same job. So women were still very unfairly treated. When WW2 began, women were once again needed to fill the gaps left by men. They were once again called upon to work in industry, on farms, as nurses and also in the forces; though not in the front line. This time round, however, there were a few differences which marked women's statuses at this point compared to in WW1; in WW1, male-dominated trade unions had largely resented women taking men's jobs. ...read more.

Because of this, it could be said that many women found that having a job gave them less freedom, not more. These days, however, many women are not prepared to accept the housewife role, and, as divorce is legal, an unhappy marriage can be ended easily. Eighty years ago, this would not have been possible. Over the past eighty years, many events have taken place, and many people have helped to bring women the equality that they deserve. In 1980, the end of the period being studied in this essay, Britain was being run by a woman. In 1900 it would have been a ridiculous idea, but events and people over the years helped general attitudes to evolve: by 1980, women were, although not completely, generally considered equal. At this time, women had so many more liberties than in 1900: women could vote on the same terms as men, it was perfectly acceptable for a woman to get an education and a job and it was the law to treat women equally in the workplace. Contraception became widely available, so that women could plan out how many children they wanted and plan their careers easily. Women were not forced to have families, and base their lives around their husband and children; instead, they were allowed to concentrate on their ambitions. The people that made these things possible were the women's rights organisations, such as the Women's Liberation Movement, and the Suffragettes, who fought for the vote and the right to equal opportunities for men and women. Catalysts within this process were the two world wars, in which many women had jobs for the first time and gained a sense of freedom. Now that they had tasted freedom, they did not want to go back. Attitudes towards women were forced to change, and now, even though sexism still continues to limit some women, most women are free to express themselves in what they wear, and are able to continue life without having to obey the men in their lives. ...read more.