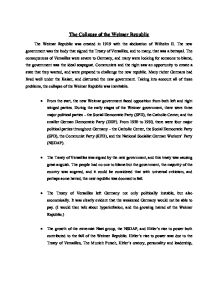 The Collapse of the Weimer Republic

The Collapse of the Weimer Republic The Weimar Republic was created in 1919 with the abdication of Wilhelm II. The new government was the body that signed the Treaty of Versailles, and to many, that was a betrayal. The consequences of Versailles were severe to Germany, and many were looking for someone to blame, the government was the ideal scapegoat. Communists and the right saw an opportunity to create a state that they wanted, and were prepared to challenge the new republic. Many richer Germans had lived well under the Kaiser, and distrusted the new government. Taking into account all of these problems, the collapse of the Weimer Republic was inevitable. * From the start, the new Weimar government faced opposition from both left and right winged parties. ...read more.

The people had no one to blame but the government, the majority of the country was angered, and it could be considered that with universal criticism, and perhaps some hatred, the new republic was doomed to fail. * The Treaty of Versailles left Germany not only politically instable, but also economically. It was clearly evident that the weakened Germany would not be able to pay. (I would then talk about hyperinflation, and the growing hatred of the Weimer Republic.) * The growth of the extremist Nazi group, the NSDAP, and Hitler's rise to power both contributed to the fall of the Weimer Republic. Hitler's rise to power was due to the Treaty of Versailles, The Munich Putsch, Hitler's oratory, personality and leadership, The 1929 World Economic Depression, The decision by Von Papen and Hildenburg to appoint Hitler as Chancellor in 1933, and The Enabling Law. ...read more.

The republic was beginning to overcome it's difficulties during the mid 1920's as economic, political, and cultural improvements were occurring, and if it hadn't been for circumstances, mainly the Wall Street Crash, the republic may have prospered for many years. These circumstances gave the extremists, the Nazi's, an opportunity for advancement as the people searched for a more radical solution to the depression. It was not evident that the republic was doomed from the start, but it was evident that the republic was doomed from 1930, when the country was splitting into two groups, left and right, who both wanted an end to the republic, and a change to another political system, communist or Nazi. There was no one factor that led to the collapse of the Weimer Republic. Instead, it was a combination of circumstances and events that forced the declination of Weimer Germany. ...read more.