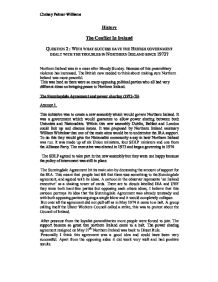 The Conflict In Ireland

History The Conflict In Ireland QUESTION 2 : WITH WHAT SUCCESS HAVE THE BRITISH GOVERNMENT DEALT WITH THE TROUBLES IN NORTHERN IRELAND SINCE 1972? Northern Ireland was in a mess after Bloody Sunday. Because of this paramilitary violence has increased. The British now needed to think about making sure Northern Ireland was more peaceful. This was hard as there were so many opposing political parties who all had very different ideas on bringing peace to Northern Ireland. The Sunningdale Agreement and power sharing (1972-73) Attempt 1. This initiative was to create a new assembly which would govern Northern Ireland. It was a government which would guarantee to allow power sharing between both Unionists and Nationalists. Within this new assembly Dublin, Belfast and London could link up and discuss issues. It was proposed by Northern Ireland secretary William Whitelaw that one of the main aims would be to undermine the IRA support. To do this they would give the Nationalist community a say in how Northern Ireland was run. It was made up of six Union ministers, four SDLP ministers and one from the Alliance Party. The executive was elected in 1973 and began governing in 1974 The SDLP agreed to take part in the new assembly but they were not happy because the policy of internment was still in place. The Sunningdale Agreement hit its main aim by decreasing the amount of support for the IRA. This meant that people had felt that there was something to the Sunningdale agreement, and agreed with its ideas. A cartoon in the observer represents 'an Ireland executive' as a shaking tower of cards. ...read more.

This meant that maybe they would accept it and things could begin to move forwards. Although they did not reject it the did continue to fight and kill each other. This obviously wasn't very positive and pushed backward the peace effort. The first paramilitary ceasefires was a great advance, and there was many advances in 1993, but 1994 didn't start so well. Republicans wanted clarification of the Downing Street Declaration. This didn't go down very well. Tensions built when us president Bill Clinton gave Sinn Fein leader Gerry Adams a visa. This would allow him to meet with Irish American groups in the USA. The talk in America allowed new thoughts, and on August 13th the IRA announced a complete ceasefire. This was followed by a cease fire declared by the loyalist paramilitaries on 13th October. Christmas 1994 was one of the quietest for many years, people didn't want to celebrate of the top as many ceasefires had come and gone in the past. The Joint Framework Document and The Decommissioning of Weapons. Attempt 4 The Joint Framework Document happened in 1995. the ceasefires had continued into February the next year. With this The Joint Framework Document could be published. It was written up by British and Irish governments. The document would set out a peace-process. Within it there would be a new assembly for Northern Ireland and a North-South council of ministers. They would have an influence over a range of issues. Over all The Joint Framework Document was accepted and in 1995 there was the lowest death tolls Northern Ireland had seen during the troubles. I think thing this was important as many people saw that there being fewer deaths might have meant that is more chance that this would carry one. ...read more.

The last term was that there would be an early release for paramilitary prisoners. This meant that nationalists who had felt they had been unfairly convicted of paramilitary violence and put in prison could be released, with this release they would have a new found respect for the government. This obviously made the victims of paramilitary violence feel unjust. 1998 had started with some important events, in January there had been a crisis when Loyalist paramilitaries seemed to be about to withdraw their support for the peace process. This would have a major domino effect as they had a lot of power within their areas of influence. After visists from Mo Mowlan and David Trimble in the Maze prison their support had been regained. From this moment it seemed like both loyalist and republic paramilitaries wanted to try and end the conflict. This was not the end as there were still splinter groups who rejected the peace process, their small groups were still prepared to fight and in February and March a series of bombing and shootings took place. A deadline had been decided of April 9th. President Bill Clinton had been working behind the scenes. He had been encouraging many leaders to talk or compromise. From April 6th Tony Blair and Bertie Aherene and many other Northern Ireland Leader worked non stop. On Saturday 10th April an announcement was made that the political parties of Northern Ireland had made a compromise. This was only the beginning as there was a referendum to be held in May 1998. This would ask the people of Northern Ireland whether they accepted articles 2 and 3 (claiming the North as part of the Republic) to be removed. The result in the Republic was overwhelming with 94%. But there was still a clear majority of 71 percent in Chelsey Palmer-Williams ...read more.