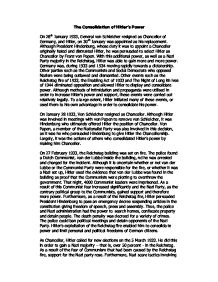 The Consolidation of Hitler's Power.

The Consolidation of Hitler's Power On 28th January 1933, General von Schleicher resigned as Chancellor of Germany, and Hitler, on 30th January was appointed as his replacement. Although President Hindenburg, whose duty it was to appoint a Chancellor originally hated and distrusted Hitler, he was persuaded to select Hitler as Chancellor by Franz von Papen. With this additional power, as well as a Nazi Party majority in the Reichstag, Hitler was able to gain more and more power. Germany was, during 1933 and 1934 moving rapidly towards a dictatorship. Other parties such as the Communists and Social Democrats who opposed Nazism were being outlawed and dismantled. Other events such as the Reichstag fire of 1933, the Enabling Act of 1933 and The Night of Long Knives of 1944 eliminated opposition and allowed Hitler to display and consolidate power. Although methods of intimidation and propaganda were utilised in order to increase Hitler's power and support, these events were carried out relatively legally. To a large extent, Hitler initiated many of these events, or used them to his own advantage in order to consolidate his power. On January 28 1933, Von Schleicher resigned as Chancellor. ...read more.

Furthermore, Nazi scare tactics involving the SA breaking up political meetings and uniformed Nazis oversaw polling stations and intimidated voters into voting for the Nazi Party. A coalition with the Nationalist party enabled Hitler to create a government, with him leading it as the Chancellor. Essentially, Hitler's exploitation of the Reichstag fire as well as other forms of Nazi propaganda enabled him to consolidate power. Hitler introduced the Enabling Act in March 1933, once he had formed a government in the Reichstag. This act allowed Hitler to make laws without the approval of the President or the Reichstag. The Reichstag (albeit after the Communists had been banned from it, and other members of it had been sufficiently intimidated) voted to pass this law, effectively consolidating Hitler's power. This Enabling Act effectively established Hitler as dictator of Germany, and ended the period of Weimar Democracy. Hitler now had the power to eliminate opponents and make his own laws. Although the Enabling Act had silenced political opponents and threats, Hitler was now threatened by the SA, lead by Ernst Rohm. The SA was made up of more than 3 million men from the lower middle class, and had been a major factor in getting the Nazis into power. ...read more.

Therefore, Hitler was directly involved in consolidating his power in this respect. Hitler was head of state, government, and the army, and the armed forces took an oath of loyalty to Hitler. Although Hitler in early 1933 had little to do with consolidating his power through being given the role of chancellor, to a large extent his own actions and initiatives throughout later 1933 and 1934 as a virtual dictator allowed him to consolidate his power. In the March 1933 elections and the consequences of the Reichstag fire, Hitler's actions and initiatives were relatively covert, and the power he consolidated was achieved largely through the Nazi party as a whole. However, after the crucial Enabling Act, which was Hitler's initiative, he was able to rule Germany as a dictatorship. The events and initiatives that followed that were initiated by Hitler, to a large degree were significant in consolidating his power - events such as the Night of the Long Knives which removed the threat of the SA and Rohm, and increased Hitler's power through the army. Although initially Hitler's consolidation of power involved both him and other groups, throughout the majority of 1933 and 1934, Hitler's own actions and initiatives were largely responsible for the consolidation of his power. ...read more.