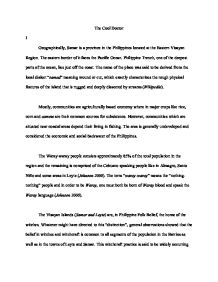 The Cool Doctor I Geographically, Samar is a province in the Philippines located at the Eastern Visayan Region. The eastern border of it faces the Pacific Ocean. Philippine Trench, one of the deepest parts of the ocean, lies just off the coast. The name of the place was said to be derived from the local dialect "samad" meaning wound or cut, which exactly characterizes the rough physical features of the island that is rugged and deeply dissected by streams (Wikipedia). Mostly, communities are agriculturally based economy where in major crops like rice, corn and camote are their common sources for subsistence. However, communities which are situated near coastal areas depend their living in fishing. The area is generally undeveloped and considered the economic and social backwater of the Philippines. The Waray-waray people consists approximately 85% of the total population in the region and the remaining is comprised of the Cebuano speaking people like in Almagro, Santo Ni�o and some areas in Leyte (Johnson 2000). The term "waray-waray" means the "nothing-nothing" people and in order to be Waray, one must both be born of Waray blood and speak the Waray language (Johnson 2000). The Visayan Islands (Samar and Leyte) ...read more.

In cities and towns with modern hospitals, the tambalan is still called by the upper-class Filipino in cases where modern medicine seems to fail. For the lower class Filipino and for the Barrio people in general the tambalan draws greater trust than the District Health Inspector who regularly visits the barrios (Arens 1982). Since Samarnon people believe that there are other beings living in this earth, the goal of the average person, then, is to live in harmony with these spiritual entities, avoiding them if possible, manipulating them for one's benefit when desirable, and dulcifying them when necessary. When pacification is necessary, a tambalan must be called. The position of the tambalan in Waray and Cebuano speaking societies in Samar is one of respect and privilege. This comes mainly from the fact that he is in contact with the spirits who positively impact the lives of the people and therefore he is perceived as someone who genuinely cares about people. They are also perceived to be able to live and move both in the natural and supernatural realms. He can use his power for good or for harm. The institution of the tambalan as the earliest "professional class in Filipino society" still carries its weight today in the barrios where there has been little change in the ways of life since older times. ...read more.

A tambalan is entitled to different jobs: herbalist (as described earlier), the spiritists and the psychic healers (Johnson 2000). He can also function in a priestly role of blessing rice crops, etc. In addition to, a tambalan can also be a midwife, normally a woman technically known as hilot or mananabang. In fishing, a tambalan may initiate a buhat ritual which can be performed at the opening of a new fish catching corral, when there is an exceptionally good catch, or when the catch has been poor (Arens 1982). Traditional beliefs are still presently practiced among the population for it becomes a dogmatic doctrine that this earth is not only comprised of natural beings but supernatural too whereby we need intermediaries who will help us to understand the animistic side of the world. It is obvious to conclude that these kinds of practices are manifestation of a rich pre-colonial society especially in the Samar-Leyte Region which created a distinction of what the original societal situation was prior to the coming of colonizers. As mentioned earlier, the tradition still remains strong and evident. It is empirical to say, that these practices have no quantifiable bases. None the less, they say, there's no harm in believing as long as you know what you are doing. As the bible says, "Faith is the substance of things hoped for, the evidence of things not seen. ...read more.