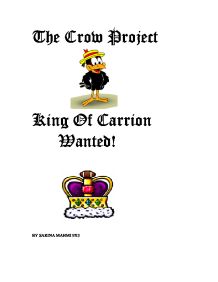 The Crow Project King Of Carrion Wanted! BY SARINA MAHMI 9X3 The crow the king was trying to get tourists to visit his palace and kingdom. He was dying for people to come and see his kingdom, I noticed the feeling of loneliness in his eyes, and then I decided to go. The king then described his palace as huge and royal so then I followed the king into his kingdom. I walked with the crow into his pace I noticed I was the only one. I entered his palace and as soon as I entered I thought that the electricity went off because all I could see was darkness, I then smelt something nasty I wondered what it was. The crow had mentioned there being lots of people but nobody was there it was just me. All I could see was a big black shadow when I came out of the shadow I thought that everything around me was empty, but I was wrong wherever I looked there were dead bodies I was shocked and scare, I freaked out. I was scared when I heard a noise like the doors shutting behind me; I tried my best to run away, when the doors were closing but before I could reach the doors already closed tight. ...read more.

Crow: I would be very pleased and my wife would feel that I have made progress in my life Mike: good (shaking his head) right last question where did you find the advertisement? Crow: my wife had found it in a newspaper article and told me to do the job and I done it in my own will. Mike: right okay, that is it thank you for you cooperation if we do choose you we will send a letter Crow: thank you very much as well Mike: my pleasure, you may now stop recording now john John: okay Crow: few that went well and was okay I quiet enjoyed it very much, atleast it is done now (talking to himself) The bird who wanted to be a king Mr. Crow He didn't know why people treated him so low To be the king of carrion was his dream But now he don't have anyone on his team He was feeling all sad and alone Kicking the tune and breaking the tone The way he was cursed His tears just burst The crow wanted to be a king so he had power He wanted to rule inside the big tower Mr crow thinks every night That nothing comes out right It's a ...read more.

Even if someone had bathed him he would still have smelt as he hates soap and shampoo. When ever crow tilted his hear yellow sticky drops came out of his ear (disgusting) .All crow was waiting for was his mother but he knew that if his mother came she would have been shouting around saying why is the house dirty and such. So crow just sat down eating on junk food, someone knocked on the door he wondered what it was he went and opened the door." Hello my lovely son ow you need a bath darling you smell" crow looked just shocked "oh my god mum you yes me darling, crow what have you done?" "mum don't blame me" "I am not blaming you, you need to get out of this situation I am serious I want you to make success in life that is the only way I am going to forgive you I have only been away for 2 weeks and you done this shame on you, yuck disgusting now give me the newspaper." An advertisement fell out of the paper about a king wanted from that stage crows mother made crow volunteer for this job, crow was then forced to get this job! :) THE CROW PROJECT COURSEWORK CONCLUSION! THE END! ENGLISH ...read more.