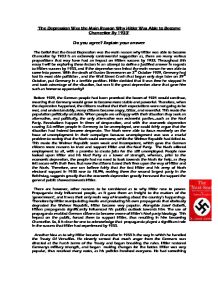 'The Depression Was the Main Reason Why Hitler Was Able to Become Chancellor By 1933' Do you agree? Explain your answer

'The Depression Was the Main Reason Why Hitler Was Able to Become Chancellor By 1933' Do you agree? Explain your answer The belief that the Great Depression was the main reason why Hitler was able to become Chancellor by 1933 is an extremely controversial suggestion as, there are many various propositions that may have had an impact on Hitlers success by 1933. Throughout this essay I will be exploring these factors in an attempt to define a justified answer in regards to Hitlers success by 1933, and if the depression was infact the main reason he was able to come into power. With the death of Gustav Stresemann on 3rd October 1929, Germany had lost its most able politician , and the Wall Street Crash that begun only days later on 29th October, put Germany in a terrible position. Hitler decided that it was time he stepped in and took advantage of the situation, but was it the great depression alone that gave him such an immense opportunity? Before 1929, the German people had been promised the boom of 1924 would continue, meaning that Germany would grow to become more stable and powerful. ...read more.

Alongside Josef Gobells, Hitlers propaganda significantly influenced his publics outlook towards him. The use of propaganda enabled German citizens to become aware of Hitler's Nazi party ideology. This impact on the public, forced them to support Hitler, thus resulting in him becoming Chancellor. So, it is clear for one to acknowledge that propaganda played a significant role in the success that Hitler had experienced by 1933. Another idea as to why Hitler became Chancellor in 1933 is the way in which he handled the Treaty Of Versailles. He cleverly sensed that much anger from the Germans was directed at the harsh terms of the Treaty and began breaking the rules. Hitler restored Germanys military strength, and began making changes for the better. Hitler was very popular, thus received many votes, as his policies involved everyone. He had something that would benefit the majority of Germans, including women, who until this point had not played any part in public society. Hitler decided that he would keep women happy by enforcing family life and self-discipline. This engrossed women with the Nazi Party, as they felt they were benefiting from Hitlers new scheme. Also, the Nazi Party, which was anti-communist, appealed to many industries in the country, as they did not want communist governments to rule their business'. ...read more.

This fear enabled Hitler to influence their lives enormously. Therefore, from this information, one can conclude that although the great depression helped Hitler become Chancellor by 1933 considerably, it was not the main reason for Hitler becoming Chancellor. In my opinion, Hitler earned his power by manipulating the media, pleasing his people, and sorting out the countries economic affairs. Hitler took advantage of the chaotic situation that the depression caused, seizing it to begin his moments of fame, but it was not the depression that mainly influenced his success, for if Hitler had not proved worthy (such as his precedes) he would have lost all favour. Hitler did infact exploit the political crisi of Germany, by holding rallies, and touring Germany with his promises for the economy, but one is lead to believe that although Hitlers 'storm troopers' attacked stray opposers, surely if the entire country of Germany was unhappy with Hitlers points they could have removed him from power, as they did once before. For this reason, it becomes clear that the depression was not the main reason that Hitler became Chancellor in 1933, Hitler was a very cunning but intelligent man, and at the time, society valued him and his promises. It was infact Hitlers personal qualities, and manipulation that allowed him to appeal to society, engage with them, and become their Chancellor in 1933. BY: HENA MIR-10A1 ...read more.