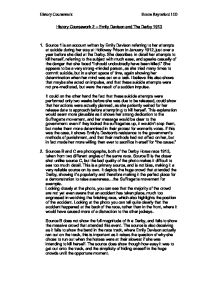 History Coursework 2 - Emily Davison and The Derby 1913 1. Source 1 is an account written by Emily Davison referring to her attempts at suicide during her stay at Holloway Prison in January 1912, just over a year before she died at the Derby. She describes in detail her attempts to kill herself, referring to the subject with much ease, and speaks casually of the danger that she faced "I should undoubtedly have been killed." She appears to be a very strong-minded person, as she tried many times to commit suicide, but in a short space of time, again showing her determination when her mind was set on a task. I believe this also shows that maybe she acted on impulse, and that these suicide attempts were not pre-meditated, but were the result of a sudden impulse. It could on the other hand the fact that these suicide attempts were performed only two weeks before she was due to be released, could show that her actions were actually planned, as she patiently waited for her release date to approach before attempting to kill herself. This explanation would seem more plausible as it shows her strong dedication to the Suffragette movement, and her message would be clear to the government: even if they locked the suffragettes up, it wouldn't stop them, but make them more determined in their protest for women's votes. If this was the case, it shows Emily's Davison's resistance to the government's methods of punishment, and that their methods had not affect on her, but in fact made her more willing then ever to sacrifice herself for "the cause." ...read more.

He justifies this by saying "it was impossible to avoid her," immediately taking the blame off both the horse and ride. They make a point of claiming that the fact the horse was the kings was an accident, whereas Emmeline tries to tell the opposite, that Emily was "offering her life as a petition to the king." The journalist also shows his ignorance when he claims she was involved with the Suffragist movement, when in fact it was the Suffragette, showing his lack of research, and blas� attitude. 4. I believe this account to be bias, as it states that the Mary Richardson is a "friend of the Pankhurst's," a Suffragette herself, and therefore would share the similar views as Emmeline Pankhurst. The autobiography was published in "1953" 40 years after the Derby 1913, which would increase the chance of mistakes in her accounts. She believed Emily to be a "very serious-minded person," through meeting her "several times," this backs-up my response to question 1, showing her determination when her mind was set on a task. The problem with the source is Mary's unreliability when she saw Emily at the track, she uses the work "seem" three times, as she looked on at Miss. Davison from a "distance," and could not give a more accurate account. Mary goes on to make assumptions, which again mirror those of Emmeline Pankhurst's as to why she gave committed suicide, " she was about to give her life for the cause." She begins to exaggerate, " I was watching her hand. ...read more.

Why would Emily have bothered to prepare, if she was to unceremoniously throw herself at a horse with the intent to kill herself? The flags found folded in her coat pocket also back up this theory, as it would have been more believable that Emily intended to pin the flags to the bridle and misjudged the speed of the horses. The horses near her home would not have compared to the speed of the racehorses at the Derby. The evidence from source G shows strong proof that Emily intended to return the following day to the "suffragette summer festival", using the exact words " She should come every day," showing her intent to return, again suggesting her death was not deliberate, but an unfortunate accident. The last piece of major evidence is the "return half of a rail ticket to London" shown in source I, showing that when she left for the Derby she did not have the intention to commit suicide. Whether she changed her mind after she got the Derby was another matter. I believe there is a strong possibility that she was fully aware of the danger she faced, and that she may have changed her mind when she got to the Derby on whether she would be sacrificing her life or not. This view would explain the train ticket, and the planning of her return. She may have realised once she arrived at the Derby, that she would not survive the stunt she planned. Looking at her character though, it would seem reasonable to assume that she was not the kind of person to back down from a challenge. GCSE History Coursework The Derby 1913 By Emma Raynsford History Coursework Emma Raynsford 11D ...read more.